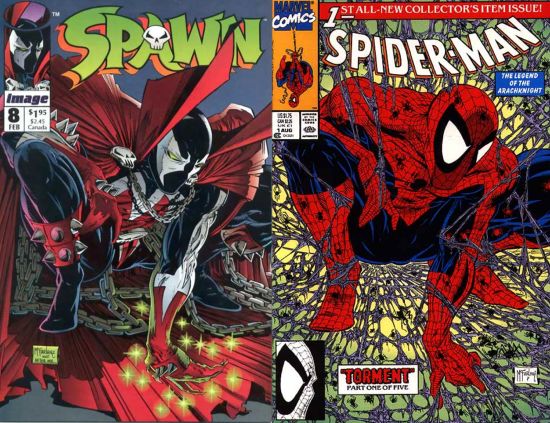 When we recently interviewed McFarlane Toys founder and Spawn creator Todd McFarlane, we asked him if he would ever draw Spider-Man for Marvel again. To our surprise, McFarlane changed around our question and actually suggested a scenario under which he would draw Spider-Man again.

While McFarlane said he wouldn’t work “for” Marvel on a Spider-Man project, he indicated that he possibly would work “with” Marvel on a Spider-Man project. McFarlane said, “Basically I’m saying , ‘Is it possible that someday I’ll wake up and have an itch to do a Spawn and Spider-Man crossover?’  Yeah. Would Marvel be interested? I don’t know. I’d have to present it to them at that point. Maybe under a circumstance like that I could sort of have my cake and eat it too.”

Since McFarlane didn’t know if Marvel would be interested in a Spawn and Spider-Man crossover, we decided to reach out to Marvel Chief Creative Officer Joe Quesada via email to get his response to McFarlane.

Here’s is Quesada’s response to Todd McFarlane on the idea of a Spawn and Spider-Man crossover.

Thanks for reaching out and pointing me towards your interview with Todd. First let me say that my respect and admiration for Todd as a creator, innovator and businessman goes without saying but also that I will never forgive him for calling me at home in the middle of the game 2 of the 2000 World Series causing me to miss one of the most historically insane moments ever. Todd knows what I’m talking about and if he’s reading this he’s probably laughing his nads off, so let’s leave it there. It ranks right up there with when I was at game six of the 2006 Mets Cardinals playoffs and I got up to go to the bathroom right at the moment that Endy Chavez made “The Catch.” Somehow I couldn’t help but feel that it was the curse of McFarlane coming back to haunt me.

But hell, that has nothing to do with comics and your question does it? So let’s get to what the fans really want to know.

One of the many things that I’m proud of this modern regime at Marvel is that we’re pretty flexible when it comes to making different projects work for different creators in all sorts of circumstances. I think that’s why we’ve been so successful working with people who normally would never have worked with us in the past or who swore off working with us back in the day and have since returned. With respect to Todd, let’s face it, there have been a handful of creators who have worked on Spidey who have left a legendary imprint and he’s is certainly one of them so of course we’d love to work with him again and doing a Spidey Spawn book sounds like a blast! Personally I just think the fans would love to see it and I think we’d all have a lot of fun doing it not to mention how much our retail community would welcome the influx of dollars brought in by the sheer number of people walking into their stores brought on by the media buzz alone.

So the simple answer is yeah, absolutely, if the stars aligned, we’d love to work in conjunction with Todd on a Spidey Spawn project, it’s a win-win.  So Todd give me a call, but don’t wait until October because I’ll be watching the World Series and if I see your name on my caller ID, there is no way I’m picking up.

So there you have it. Todd McFarlane said it was a possibility that he would work with Marvel on a Spider-Man and Spawn crossover, but he didn’t know if Marvel would be interested. We pitched what McFarlane said to Marvel, and they are “absolutely” interested.

Will it happen? Quesada has invited McFarlane to give him call, as long as it’s not during the World Series, so the ball is in McFarlane’s court. A Spawn and Spider-Man crossover could be a big win for everyone involved. With McFarlane working toward another Spawn movie, a Spawn and Spider-Man comic book crossover would certainly get Spawn into the media spotlight and raise buzz for a new Spawn movie. From Marvel's perspective, it could be another chance to reach fans about the All-New Marvel Now.

However, the biggest winners in this whole scenario would be the fans and the retailers. McFarlane drawing Spider-Man again in a Spawn and Spider-Man crossover would be a guaranteed gigantic seller. It would be a boon for the comic book industry overall and comic book retailers. And of the course, the fans would be the ultimate winners because they would get to read it.

My Hero Academia May Hit Izuku with a Crippling Reveal Soon