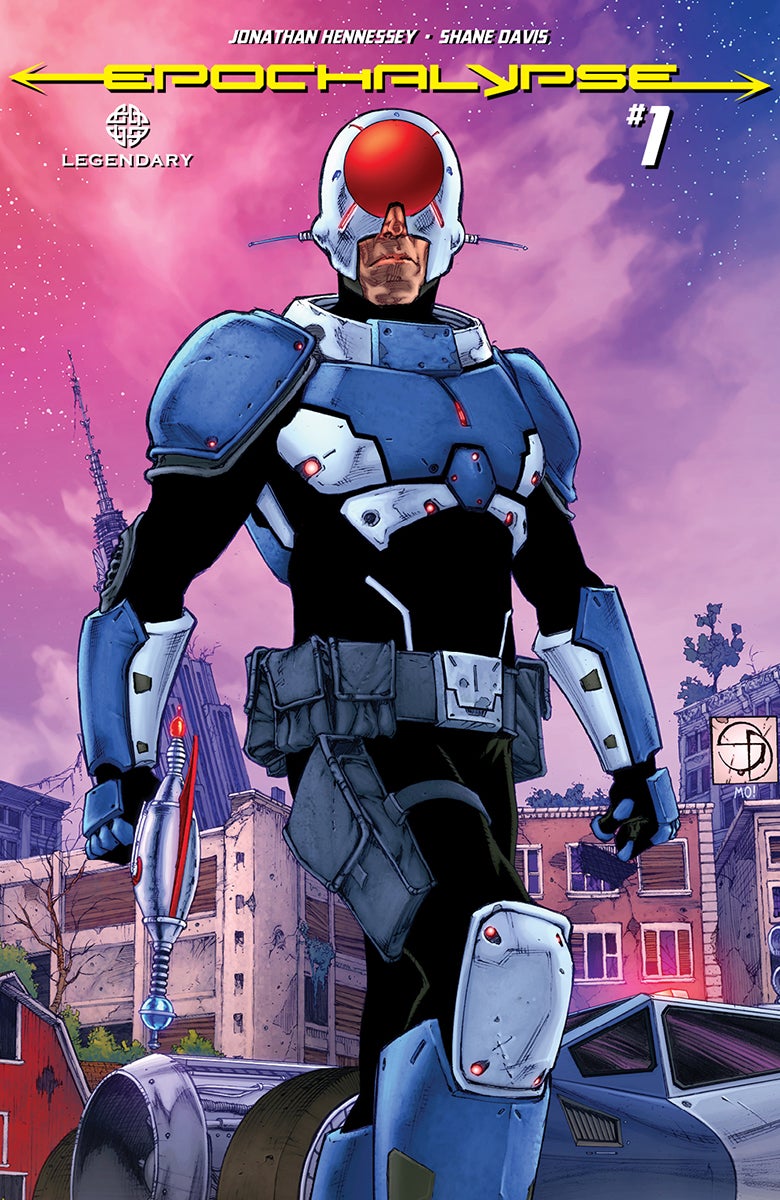 Today marks the relase of Epochalypse, a new series from Legendary Comics with writer Jonathan Hennessey and artist Shane Davis.

When a mysterious space-time phenomenon causes 600 years of human history to collapse into a single era, societies from the past, present and future are forced to coexist in a dystopian civilization. To set the timeline straight, an elite team of Resynchronization Officers must rid the world of Anachronisms - futuristic artifacts that threaten the very laws of time. To ensure our future, we must undo it.

As one defiant officer leads the manhunt for elusive scientist Dr. Tomorrow and notorious outlaw The Salesman, he is challenged by shadowy agencies, rebel militias and forbidden desire. Can our hero save history - or doom the future?

This is obviously a bit of a departure, in terms of what you're known for. How did it come together?

Do you have any favorite time-travel stories, or anything that really influenced the work?

I did try to stay away from specific influences but I'm a fan of 12 Monkeys. Back to the Future is a critical thing for anybody who loves the genre. There's a Spanish movie called Time Crime that's realistic and really tight in terms of the logistics of paradoxes.

I wanted to get away from time travel getting hung up on paradoxes and on major names and places that are usually the go-to kinds of places for time travel stories. Time travel stories have been around for a long time and it's very picked over piece of ground. What Epochalypse does that I think is an innovation is that in most time travel stories you have one person, one small group of people who go do something, go the future, come back. Epochalypse is different because the question is what would happen if everyone could simultaneously time travel.

It is something that I believe has not been done in time travel before which is turning it on his head, making everyone tt and there's not going to be any time travel in the story at all, it all has already happened so it's all the aftermath of what would happen if everyone spontaneously time traveled.

Yeah, it almost feels like a technological advance: rather than something a guy hoards in his garage, it goes wide and changes the world quickly.

Well, the nature of what caused the time travel is still unknown at the beinning and I promise it will be paid off in the series. There is the possibility that it is a freak act of nature which is what many of the characters believe.

Some people believe that it's an act of nature, some believe it's an act of God, some think that they've all died and everyone is in purgatory. Those impressions are very informed by the culture and the individual time these people come from.

How did you come to work with Shane Davis on this project?

I'm very fortunate this is not what I'm known for. I'm not a marquee name but Shane Davis is, so I was very lucky and fortunate that I got to work with him at all.

He's had previous collaborations at Legendary and they want to compete with the best that's out there and Shane Davis was one of the names they were able to recruit to make that happen. So he had his pick of the projects Legendary was developing and mine was one of them. I was very fortunate that he saw something in it.

Did you collaborate closely with him, or just kind of hand him the script and say "go to town?"

He's got the reputation and he's got the talent that is already established and out there, so it wasn't really set up for me to work closely with him and give him a lot of notes -- and in the end I didn't need to.

What's interesting to me is that Epochalypse is something that is a story I've been walking around with for a very long time. I'm in my forties and probably in my early 20s, I had some iteration of it.

At one time I hired another artist to do a spec issue I could shop around and it got close with a couple of other places but it wasn't really developed enough to close the deal. I was very happy with that art, and a lot of the choices that were made, and it's interesting to me that Shane did a lot of things that were very similar without having any access to the material. He captured the vision of the project without a lot of notes from me.

Wow, that's pretty crazy. Is that something we'll ever be able to see?

I'm sure there's a way I could show it. I obviously have it on hand. I was thinking about putting it up on the web for curiosity seekers. It might be an interesting experiment for any lover of the genre.

What do you want people to go away knowing beyond the first issue? What's the most important part of the story once you get past the premise?

I think a couple of things. One of the great things about this project for me is that my twin loves are history and science fiction and with this I get to exercise both. In the Epochalypse universe, 600 years of history has collapsed into one new timeline with the midpoint of that being 1950.

So the book will explore not only what has happened in the past but what happens in the future relative to the reader and there will be characters and situations and things from the future related to the past that will ultimately explain how this universe got ot be the way it is. I also think that Johan as the main character is an interesting take. It turns out that he has a lot of ghosts, witnessing his own family get massacred.

We've seen that motivate a lot of heroes but in his case, my hero witnessing this violence makes him more empathetic, makes him more sympathetic with people even the people that he needs to chase down so it's kind of like an anti-Batman in some ways. There's no way for him to go out and get revenge on the people who killed his family but what he wants to do is to develop a capacity for appreciating the suffering that people have been through and he's every dedicated to alleviating that suffering. But in some ways it's a character flaw because he thinks he's so good that when people don't cooperate he can get very angry -- when people maybe don't think he's as good as he thinks he is.