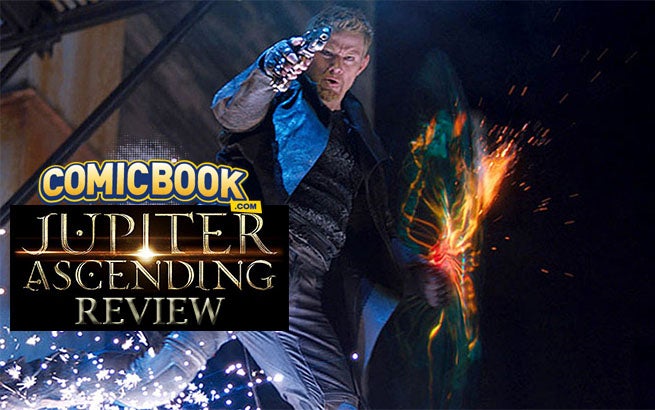 This weekend Jupiter Ascending hits theaters. The movie, which is already getting loads of attention for it's awe-inspiring visuals, follows Jupiter Jones on a dangerous space quest for royalty throughout the universe. It's the ambitious return of the Wachowski siblings who are best known for their work on The Matrix trilogy from 1999 to the early 2000s.

Jupiter Jones (Mila Kunis) is a young, pretty girl who cleans toilets with her hard working, yet little to show for it family in Chicago. She fantasizes about an extravagant life as she holds fancy, princess-like dresses up to herself in rich folks' apartments she could never be worthy of entering otherwise.

Little does she know, though, that she is the reincarnate of extra-terrestrial royalty. Luckily for her, Caine Wise (Channing Tatum) has been sent to retrieve her from Earth. Caine, for the purposes of keeping things simple, is a hybrid of a wolf and a human who has problems with authority and royalty. Yes, that does contradict the fact the he's going to fall in love with her majesty, Jupiter, and be willing to risk his own love to protect her, but we'll have to allow it. Plus, he lays the smackdown on giant flying lizards and it's awesome.

It's when Caine and Jupiter leave Earth that the real ride begins. The plot has a very "Game of Thrones" feel to it. Jupiter becomes caught up in a war of siblings who want to steal and harvest her inherited Earth away. Yes, she inherited the entire Earth.

Although the relationship between Caine and Jupiter is very sudden and Jupiter is almost intolerably impressionable, it is fun to watch. That might be because of the stunning visuals, but either way, it's enjoyable. If anything can be taken away from this, it's that Gambit is going to be a lot of fun. Channing Tatum does an impressive job in a film extremely heavy with special effects.

From any trailer you've seen for Jupiter Ascending, you've been able to assume that it's going to be a lot of fun to look at. That could not be more true. This is film feels like one of the biggest steps forward in visual effects since The Matrix introduced "Bullet Time." The Wachowskis have a knack for imagination, no doubt.

When it's all said and done, you'll probably realize the only reason you were rooting for Caine and Jupiter was not because you actually liked them or cared for them, but because they were trying to save the planet you're watching the movie from. In fact, the only character you'll probably really care for is Stinger (Sean Bean) because he's helping Caine and Jupiter, but also because he's the only character that's somewhat relatable and it isn't forced or exaggerated.

As for the villains, each one has a chance to shine. They're siblings and each one is unique and 1000's of years old. The one that stands out, though, is by far Balem Abrasax (Eddie Redmayne). Balem, an apparent supreme ruler who is hungry for harvesting the lives on Earth, says everything very softly while staring off into somewhere unknown for some reason. It was an interesting way to show that the character was damaged and obsessive but that doesn't mean it translates well to the screen.

Bottom line: Jupiter Ascending is an innovative and absolutely stunning visual display of sci-fi space adventures. The story is imperfect, yet appropriately complex and satisfying. 7.3/10

Jupiter Ascending Review: An Ambitious Adventure Of The Universe