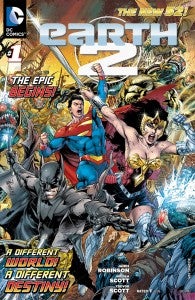 Whether it will tie into the events of Trinity War or not is anyone's guess, but Justice League writer Geoff Johns has confirmed via Twitter that there are plans already in motion to tie that book into Earth 2, James Robinson and Nicola Scott's Justice Society-centric book, the second issue of which comes out today.

This, combined with yesterday's rumors that Justice League artist Jim Lee would step down soon, to be replaced by another A-list talent, paints a picture of a series that's very much in flux as DC's New 52 initiative enters its second year and its sister publication, Justice League International, ends and is presumably reborn, possibly under Johns.

Last weekend, Johns tweeted, "Holiday weekend talking comics, barbecuing ribs and sitting in the sun with@JamesDRobinson ‪#JLEarth2plans‬". Robinson, of course, was spending most of that weekend fielding questions from media in preparation for today's release of Earth 2 #2, in which one of the series' lead characters, Green Lantern Alan Scott, is revealed to be gay.

There's a storied history of crossover events between the Justice League of Earth 1 and the Justice Society of Earth 2, going all the way back to the earliest days following the revelation that DC even had a Multiverse. Early crossovers, usually titled with the word "Crisis" in them, eventually led to the first linewide comics event, Marv Wolfman and George Perez's Crisis on Infinite Earths. Perez, of course, is one of the artists whose work currently takes them to DC's new Earth 2--albeit on Worlds' Finest, not Earth 2 itself. Twenty years after that initial story, Geoff Johns was the one to write Infinite Crisis, DC's first official sequel to Crisis on Infinite Earths.

Justice League to Cross Over With Earth 2, Lose Jim Lee?

Nintendo Insider Tease Has Fans of The Legend of Zelda: Breath of the Wild 2 Excited