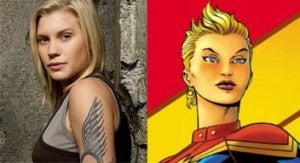 How does a rumor that a particular actress is in the running for a comic book movie role start? Well, sometimes it starts with the actress herself. A couple weeks ago Comicbook.com reported on Katee Sackhoff promising to sell her first born to play Harley Quinn in a movie. But it turns out that Harley Quinn is not the only comic book role that Sackhoff has an interest in.

Combine Sackhoff's comments about talking to Marvel with Marvel’s Louis D’Esposito's recent comments about Marvel wanting to do a movie with a female superhero lead and it translates into instant rumor.