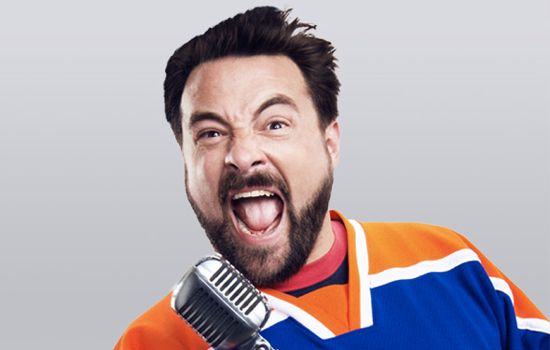 In addition to continuing to work on upcoming films Yoga Hosers, Clerks III and Moose Jaws, the popular indy director will also be planning to shoot his long-awaited hockey epic, Hit Somebody.

In an interview with Slash Film, Smith explains that while procuring funding for his film Tusk and other projects with the company Star Stream, Hit Somebody was pre-approved in the process.

“So we were having this conversation about fake Canada that I keep setting the movies in now for this True North Trilogy,” Smith explained. “And [Kim Ledford of Star Stream], her former boss, he used to work tangentially in the world of the NHL (National Hockey League). Howard Baldwin I believe was her former boss. So, you know, she knows a lot about the world of hockey, particularly the WHA (World Hockey Association). And I was like ‘Oh my Lord, I have written this mini-series that we were planning to do with CBC up in Canada. That, you know, I’ve been sitting on for a while.’ I said, ‘You would love to read it, just because it’s set in the world that you know very well.’ And then when I was all over, she was like ‘Wow, we’re making this right now.’ And so we have two meetings and we met with our Canadian counterparts, ’cause we’re gonna shoot up a lot of it up North and then some of it in Michigan as well. But we were able to kind of pull the budget together. So in the fall of 2015, we head up to it looks like Northern Ontario and start shooting Hit Somebody.”

Hit Somebody is planned to be filmed in the fall of 2015.

Kevin Smith's Hit Somebody To Film In Fall 2015