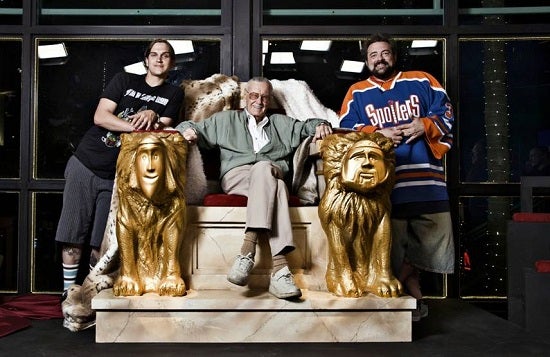 , the SmodCo Productions TV series that mixed movie reviews, audience reaction, interviews and comedy videos, will return for a second season--but this time it will be on Canada's Comedy Channel, not on Hulu.

10 new half hour episodes are set to be shot in Los Angeles in December, but THR claims those shows won't be seen in the U.S. market, at least for now. Smith, via his Facebook page, told U.S. audiences that he would let them know where they could see it as the airdates got closer.

Hulu, which aired the first season of the series, will not run the second season.

Smith, who referenced Canadian teen soap staple Degrassi Junior High in his film Chasing Amy, later went on to appear in a three-episode guest arc on Degrassi High, released on DVD under the title Jay and Silent Bob Do Degrassi.

"For many years, Canadians have had a special connection with Kevin Smith, as has Bell Media,” said Catherine MacLeod, senior vp specialty channels at Bell Media. "We’re thrilled to work with Kevin to bring the second season of the hilariously smart Spoilers to Canadians."