Kong: Skull Island is now in theaters, and viewers are getting their first taste of the King Kong mythos rebooted into a bold new cinematic giant Monsterverse.

It's no secret that Skull Island is attempting to bring the King Kong mythos together with the rebooted Godzilla movie universe, in anticipation of the two giant movie monsters facing-off in a the 2020 event film. And so, like with any modern cinematic universe where multiple franchises exist in the same sandbox, Kong: Skull Island has a post-credit "button" scene, meant to kick off the next chapter of the saga.

On the next page we'll run down the meaning and implications of Skull Island's post-credit scene, so needless to say, if you haven't seen the film, do NOT read on! Spoilers Follow!

NEXT: Which Monsters Are Revealed in Skull Island?

Skull Island's post-credit scene involves Tom Hiddleston's James Conrad and Brie Larson's Mason Weaver being detained by the government, after witnessing (and surviving) the existence of Kong and the Skull Crawler lizards on Skull Island.

As James and Mason grow agitated (and sarcastic) about their treatment, Monarch researcher Houston Brooks (Corey Hawkins) bursts into the room with fellow researcher San (Tian Jing), carrying some shocking findings. Apparently, Brooks' "Hollow Earth Theory" was very much correct, and he's since confirmed that there exist pockets of hollow earth, wherein entire worlds of giant monsters like Kong roam.

Fans of the Godzilla franchise will recognize the referenced place as some likely version of "Monster Island," a place from the Godzilla mythos where many iconic monsters can be found (More on them later...).

Finally, as Brooks says ominously, "Kong isn't the only king." And with that, we get the big reveal that fans have been waiting for - if only in sketch art form and audio recording: Godzilla is the other guardian that keeps creatures like the Skull Eaters at bay.

Brooks' revelation is of course a prelude to the events we witnessed in the 2014 Godzilla reboot (where Monarch is a fully established agency); it also sets up both the expanded monster world we'll see in Godzilla: King of Monsters in 2019, as well as the epic event that will be Godzilla vs. King Kong in 2020.

Check out Any of the movie pages below for more info - and be sure to rate Kong: Skull Island for yourself in our user rankings!

The year is 1973. Somewhere in our world, it is said that there exists a wondrous island unspoiled by man – a land shrouded in mystery, where myth runs wild. Uncharted and undiscovered. When the secretive organization known as Monarch identify this destination as the origin point for mysterious new superspecies, they mount an expedition to discover its secrets. What they find on Skull Island is an adventure beyond any human experience. An exotic paradise of wonders and terrors, where flora and fauna have fused together into an Eden of otherworldly jungle creatures.

As one group fights to escape and the other declares war on Kong, we discover that the mighty primate is at the center of a battle for dominion over the island, locked into a 'survival of the fittest' face-off with the terrifying apex predators responsible for wiping out his kin. Driven by vengeance, Kong will become nature's fury, and fight to take his rightful place upon the throne of most powerful beast on the island, revealing the story of how Kong became King.

Jordan Vogt-Roberts (The Kings of Summer) directs the film from a screenplay by Max Borenstein, John Gatins, Dan Gilroy and Derek Connolly. The film is produced by Legendary's Thomas Tull and Jon Jashni with Mary Parent. The executive producers are Eric McLeod and Alex Garcia.

It's been released worldwide in 2D, 3D in select cinemas, and IMAX.

Godzilla: King of the Monsters2019 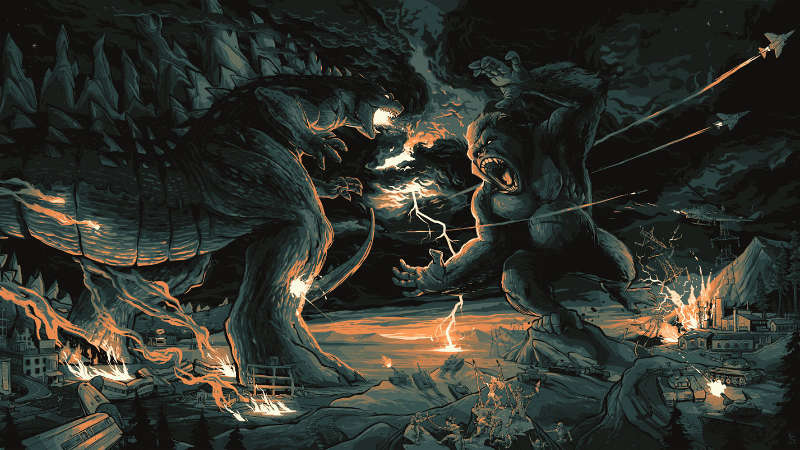