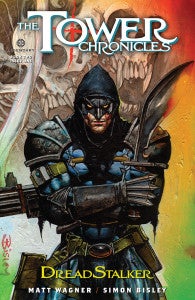 Last year, famed comics creators Matt Wagner and Simon Bisley introduced the world of The Tower Chronicles to comics. The first volume was an oversized one, with additional books set to continue in that vein, publishing as frequently as the lengthy projects took to deliver. Well, Legendary has now decided that the way to go with the story--their flagship publication, after all--is to have it more visible, and to continue the book as a monthly series. The story follows John Tower, a kind of supernatural detective/assassin whose initial contact with the reader is one that leaves you wondering exactly how good a guy he is. "In the first issue, he's very aloof–very much in the Clint Eastwood sort of mold, a very taciturn sort of main character and in fact I'd say in the first book we're not even sure whether we like him very well," Wagner explained the character to ComicBook.com at the time. "But when I first entered into this project with Thomas Tull, the owner of Legendary Entertainment, Thomas is the one who had the initial idea for the character and I'm the one who brought the human story to the table because I said, 'Well, it's all well and good to have a great, cool hot shot tough-as-nails adventurer, but we have to give a damn about him.' So as the story progresses, little by little the mysteries of his past get peeled away and we learn his backstory step by step by step." Wagner and Bisley will remain on board. The first monthly installment--The Tower Chronicles: Dreadstalker #1--will hit comic shops in April 2014.

Legendary Comics To Continue The Tower Chronicles As a Monthly Series