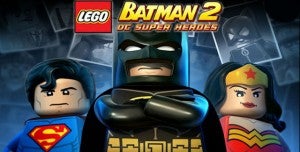 Well, Lego Batman 2 was finally released on Tuesday and I wasted no time picking it up to play.  Now, I’ve played a lot of the LEGO games.  Stars Wars, Indiana Jones, some Harry Potter, and I’ve always had fun with them.  I skipped the Pirates game as I didn’t even like the movies so why waste my time with the games.  The last one I actually did play was the Original LEGO Batman.  But no matter what series I played, I loved them because they were simple, silly, and just plain fun.  By playing as your favorite characters in block form and destroying every conceivable thing you can to fill that golden bar up above or collecting every secret item and block there was, the games have high replay potential.  So I was excited to hear that a sequel was being made for Batman.  I mean, what could be better than playing, not only as Batman and Robin, but a list of heroes and villains from the D.C. Universe?

Unfortunately, I have found this particular title lacking in some key spots and I think it detracts from the game.  Don’t get me wrong, the overall game is pretty darn good.  The first thing that caught me completely off guard was the introduction of voice acting.  Now, the first Batman game gave you small snippets of original story but nothing that came together as a whole.  But this time, they’ve really outdone themselves with creating a large, cohesive story that flows naturally and that in itself breathes life into a series that, for some, has grown stale.  And to hear the characters speak with actual voices instead of over exaggerated facial expressions and grunts is strange but oddly amusing.  It’s even better to know the voices of Lex and Batman are the ones we’ve come to know from their respecting animated series.  Though it is slightly sad to hear someone else doing the voice of the Joker.  But, it’s something that is easily forgotten and not worth stressing over.  Now, I’ve yet to actually play and beat the game entirely as I was trying to get a feel of the controls, the original story, the changes made, and the things that have stayed the same.

The story levels are pretty much the standard fair.  You go through a linear path destroying multiple items and background objects to collect LEGO coins, finding hidden LEGO capsules to build that vehicle at the end, and unlocking new suits and abilities that both aid you in finishing the level and helping you to find elusive items and citizens to save that you can only find in free play.  But despite how fun it can be to do this, it can also get a tad tedious for those of us who are used to more challenge in their games.  But it definitely doesn’t make the game hard to play.

But the same cannot be said for some of the other changes made.

The biggest change they have made was doing away with the small HUB world from previous games.  For Star Wars it was the cantina, for Harry Potter it was the school, and the Batcave for the original.  They’ve completely gotten rid of this and instead have gone for an open world sandbox in the likes of Grand Theft Auto.  Now, I typically enjoy this type of thing.  The greatest thing about Grand Theft Auto or the original Crackdown, was hopping into a car, speeding off and destroying anything you can.  Sure it’s mindless and not very productive to the overall story, but we all need a release.  And when I heard they were going for a similar thing for this game, I was excited to see what they were going to do with it.  What could be better than speeding through the streets of Gotham behind the wheel of the Batmobile, destroying anything I could just to get coins?  Or, even better, flying through Gotham as the Man of Steel.  Sadly, what we get instead is an attempt at something new that still has fundamental flaws in its execution.

To say the world is a mess is an understatement.  The map is hidden until you find ways to unlock various portions of it.  But even when revealed, it doesn’t really help with navigating the confusing streets of Gotham.  Unlike past games where you bought characters and vehicles and other such things from specified locations in the HUB, they’ve instead spread everything throughout the city.  From doorways having to be built from gold blocks, to random areas where vehicles are hidden, to random encounters where you’re suddenly offered to buy the character, it’s kind of a confusing mess.  But you’ll also be searching for both red and gold blocks throughout the streets and rooftops of the city.  Now, none of this would be a problem except for the one major problem.

And that is the world map and the compass given to you.  Now, in a large area that you are able to run around and play in, a map or a reliable compass or sorts is invaluable.  You need to know where you’re going and where your next target is.  Assassin’s Creed and very recently, Arkham City had this nailed down.  Now, despite some of the flaws I pointed out in my review for Arkham City’s world map and “compass” type way of navigating, the one saving grace was that the main target was easy to find and, more importantly, when you set your own marker, you could easily follow and find it.  Even Grand Theft Auto has a GPS that easily leads you through the maze of streets and buildings to the marker.  Now, though you can place your own marker in this game, finding it is a like finding the proverbial needle in the haystack.  The compass in the upper left corner is a confused mess that “points” you in the right direction but, add on all the variables of buildings, water, and mountain/forest obstacles, it becomes a daunting path to it and you’ll find yourself running in circles trying to figure out where to go.  And there’s nothing to really tell you that you’ve reached your spot even if you’ve found it.  At least Arkham City had the message “target reached”.  This game doesn’t even give you that.  And this becomes a very irritating annoyance when you’re trying to find all those hidden goodies.  I honestly believe an open world is a good idea but they definitely have some ironing out to do because this is just too poorly done.

The only other nitpick I have is when you’re playing multi-player.  Before, when you had two people playing, the characters were confined in the same general area as each other.  Neither one of them able to go too far without the other.  Now, they’ve introduced the idea of splitting the screen and allowing the characters to go anywhere they want.  And though this can be good at times, it becomes very confusing and disorienting when it tries to split when the two of you are barely away from each other.  It’s very easy to get confused when this happens and we have “died” many a time because of the frequent splitting and un-splitting of the screen.  A good concept but, again, something that needs a little fine tuning.

But despite those issues, it far from makes this game unplayable.  All the things that have made this series fun and great are still there and one bad grape doesn’t ruin the bunch.  You just have to take the good with the bad.  And luckily, the bad is something you can live with.  The game is definitely fun and I highly suggest playing it.  Even better if you have a friend helping you destroy things.