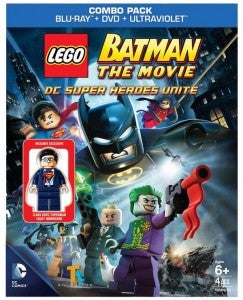 Lego versions of Batman, Robin, Superman and more will appear in a new direct-to-home video movie coming in May from Warner Home Video. Lego Batman: The Movie - DC Super Heroes Unite is set for release on May 21. With a plot based on the popular Lego Batman 2: DC Super Heroes video game, the film will be available on DVD, Blu-ray and via digital download on a variety of marketplaces. The Blu-ray combo pack will also ship with an exclusive Clark Kent Lego minifigure. The film follows Batman, Robin, Superman, and the Justice League as they attempt to stop The Joker and Lex Luthor from destroying Gotham City. Some of the scenes are taken from cut footage from Lego Batman 2: DC Super Heroes but have been re-animated for the movie.