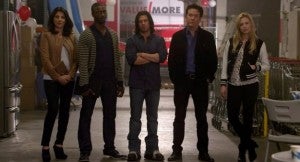 Back at the beginning of the season, Rogers's co-creator and showrunner Dean Devlin told fans in an open letter that it was possible the season finale would be the series finale, but at that time they were uncertain.

"Because of this uncertainty, John Rogers and I decided to end this season with the episode we had planned to make to end the series, way back when we shot the pilot," wrote Devlin. "So, the episode that will air on Christmas is, in fact, the series finale we had always envisioned."

At the time, he added that if the opportunity arose to take on a sixth season, they would happily do so. Apparently time ran out on that proposition.

“Leverage has thrilled audiences with its delightfully intricate plots, its stand up for the little guy attitude and its terrific performances from stars Timothy Hutton, Gina Bellman, Christian Kane, Beth Riesgraf and Aldis Hodge,” a TNT spokeswoman said in a statement. “But after five wonderful years, it’s time to say goodbye. Leverage will come to a close on Christmas at 9 p.m., with a series finale that stands as one of the show’s best episodes.

"We are honored to have worked with executive producer Dean Devlin, Electric Entertainment, creators John Rogers and Chris Downey, and all the cast and production crew on Leverage. We look forward to exploring new opportunities to work with them again in the future. We also want to thank the passionately devoted fans of Leverage, who have been the driving force behind its success.”

Rogers was similarly congratulatory and celebratory on Twitter, telling his followers, "Thank you , #leverage cast, crew & Grifters, for the 77 best episodes of my professional life.You made me work harder & better. And drunker."

("Grifters," for reference, is what Leverage fans go by online.)

Be sure to check out our interviews with John Rogers about his work with Mark Waid and Thrillbent, and his take on digital comics in general.

Leverage To End on Christmas Day