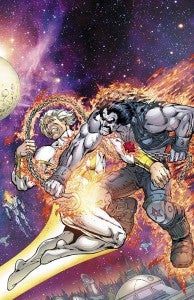 Back when veteran comics artist Jim Starlin was teasing a project that would one day turn out to be StormWatch for DC Comics, ComicBook.com noticed that there was a figure in some of the art that appeared to be Lobo, the cosmic bounty hunter last seen during Rob Liefeld's run on Deathstroke. Turns out we were right; MTV Geek has DC Comics's "The Edge" solicitations for comics shipping in July and, right there on the cover of StormWatch, Apollo is going toe-to-toe with the Main Man. The solicitation text actually cites the character as joining the cosmic team, which would be an interesting direction to take the book--one that would replace some of the muscle lost when J'Onn J'Onzz the Martian Manhunter left for Geoff Johns's Justice League of America earlier this year. 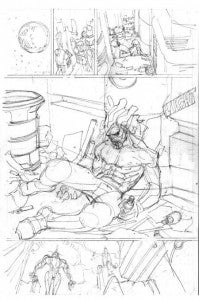 Lobo is also looking decidedly more like he did during his fan-favorite series in the '90s, as opposed to the Liefeld iteration, which the writer/artist told fans he was directed to depict as closer to Lobo's roots as an Omega Men villain. The addition of the vest and chain around his neck gives him his longtime look back--a theme we're seeing a lot of in Starlin's StormWatch. Check out the cover above and the solicitation text below.

Written by JIM STARLIN Art by YVEL GUICHET and LeBEAU UNDERWOOD Cover by JIM STARLIN and ROB HUNTER On sale JULY 3 • 32 pg, FC, $2.99 US • RATED T+ Don't miss the violence and destruction on the day Lobo joins StormWatch! How can the universe survive a battle between Lobo and Apollo?

After being one of the hottest characters in comics during the "grim 'n' gritty" antihero phase of the '90s, Lobo has had trouble connecting with audiences since. A film adaptation of the character's adventures was rumored to be in production in 2011, but after a director change and a leaked synopsis that failed to wow the fans, prospective star Dwayne "The Rock" Johnson has been telling reporters in the recent past that the project appears dead in the water.

Jujutsu Kaisen Unleashes One of Its Scariest Curses Yet

Arrowverse Star Pitched a Legion of Doom Series to The CW