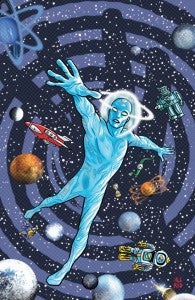 Mike Allred, the artist behind creator-owned hits like Madman and iZombie, is teaming up with fellow indie superstar Paul Pope, incoming Green Arrow scribe Ann Nocenti and a smattering of talented creators to bring DC's Mystery in Space title to Vertigo. Thanks to Bleeding Cool who pointed out a Blastr story where they ran the following solicitation text from DC:

This May, Vertigo will publish Mystery in Space an oversized one shot anthology in the vein of the classic science fiction comic book series. Following last year's Vertigo one shot anthologies Strange Adventures and The Unexpected, Mystery in Space will be written and drawn by some of the top talent in the industry and will introduce some incredible newcomers. Journey to the edge of the abyss with a story written and drawn by Mike Allred! Arrive in the middle of an intergalactic space heist with a story written and drawn by Paul Pope! Loaded with unsettling stories that will hijack your imagination and and take you to strange mysterious places Mystery in Space will also include stories by fantasy and science fiction writer Nnedi Okorafor with art by Michael Wm. Kaluta, novelist and comic book writer Robert Rodi with art by Sebastian Fiumara, as well as Ann Nocenti, Fred Harper, Andy Diggle, Davide Gianfelice, Steve Orlando, Francesco Trifogli, Ming Doyle and others. Here's the exclusive reveal the variant cover by the awesomely talented Mike Allred, (Madman, iZombie). The main cover will be by Ryan Sook.

Mostly traffic has been going the other way in recent years, with a number of Vertigo titles and properties moving over into the DC Universe proper and many traditionally-DC titles running at Vertigo (like House of Mystery) shuttering even if there's no immediate plans to launch a DC analog. One has to wonder if they got Mystery in Space and a third round pick in the Cancelled Comics Cavalcade draft in exchange for Swamp Thing.