Lex Luthor is a character who's been reinterpreted a lot of times over the years, and so we thought that rather than just go with the standard "here are five guys we'd want to play Lex," we thought we'd have a little fun with it.

So here's a rundown of each of five principal depictions of Lex Luthor, and a little later, we'll give you our picks to play each version. 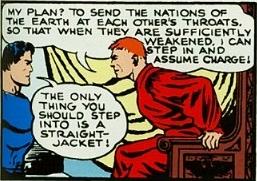 Mad scientist Luthor, with a head of hair and a mean-on for the whole world. We get comparably few stories with this version than the others, simply because the bald, armor-wearing Luthor became such an iconic look and was captured in other media.

But this could be an interesting starting point for a film franchise that has shown a desire to explore the aspects of the characters previously never mined outside of the comic book source material. 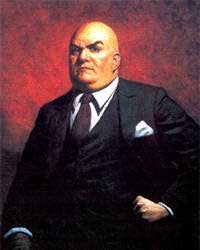 There are a couple of times that this Luthor--bald, a little pudgy, but still substantial and menacing--has popped up in the comics. The first was during the Silver Age, when the idea of Lex taking to the battlefield in a suit of armor was the default setting for most of the stories I remember.

Depending on the artist and the circumstance, he was drawn more fit and more like "Lex Prime," who we'll get to later, but in stories like Whatever Happened to the Man of Tomorrow?, I remember him being less fit than the average comic book character.

This version reappeared after The Man of Steel, too--and found purchase in the Superman comics of the late '80s and early '90s, right up until his apparent death. Then, he never wore the armor himself because, as an extension of the "Man of Steel Luthor," he wouldn't dirty his hands directly in that way. He did, however, sport a Kryptonite ring for a while... 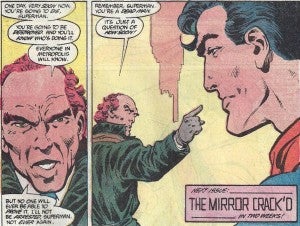 This Luthor was short-lived, but I've always thought he was one of the most believable as existing outside of a superhero universe. Balding, passing his prime and unable to connect with the one woman he's really interested in, the "most powerful man in the city" returns from a vacation to find that he's been usurped by Superman.

And, of course, proceeds to try and find a way that he could possess the Man of Steel.

This could be a compelling take on Lex for the film, if for no reason other than the fact that it would give the filmmakers an opportunity to explore the concept of a very mortal man, passing his prime and entering a period of diminished significance, facing off against Superman, "a god to them" in his own father's words. 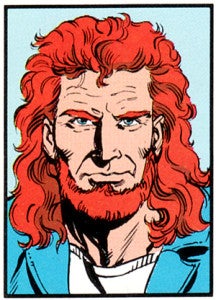 "Aussie Lex" might seem like a long shot, but as we've noted before, the filmmakers have described the Lex Luthor of Man of Steel's universe as a combination of Richard Branson and Brad Pitt--and that sure as heck seems like the long-haired, adventuring, ostensibly philanthropic version of Lex Luthor to us.

Sure, the whole kryptonite cancer and cloning thing wouldn't make it into the movie--that's a bit far out for a mere mortal in a film like Man of Steel anyway--but given the fact that the Death and Return of Superman stories, in which this version of Luthor played a key role, were source material that Henry Cavill and others used to gain insight into Superman's character, it wouldn't be too far out of the bounds of plausibility that we could see this Lex pop up.

This is the guy we'll PROBABLY see.

The brilliant, egomaniacal villain with a body that can support the Super Friends tights when he's not wearing his suit of armor--who has the resources and power of the Byrne-era Luthor but who never let his body start to get flabby and isn't afraid to get his hands dirty. 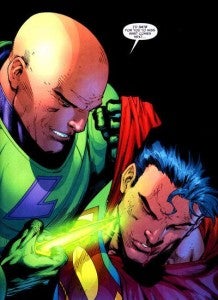 We've seen hints of this Luthor onscreen, particularly in Superman Returns, where he literally stabs Superman with a Kryptonite dagger, but we haven't really seen a full-on Lex Prime on film yet. Even that version, happy to get down and fight with a weakened Superman and not afraid to dirty his suit, was closer to Gene Hackman's proto-Byrne take than any of these others.

This is the Lex that fans want and that, even never having really seen him done right, moviegoers are hoping for and expecting each time the character shows up onscreeen.

He's also, arguably, the version that relies most heavily on Kryptonite in order to sell his schtick.

Man of Steel: Five Lex Luthors For the Sequel