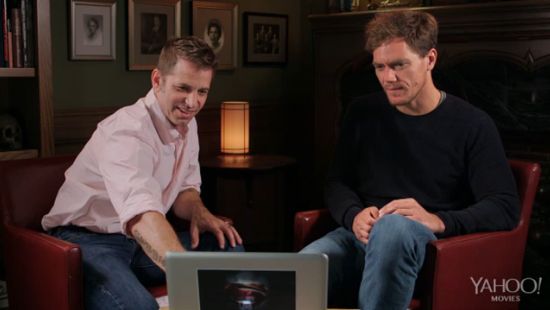 At 9 AM PT/12 Noon ET today, Warner Bros. is holding a live Q&A fan event to celebrate the Man Of Steel Blu-Ray and DVD released. However, it looks like some of the questions and answers might have been pre-taped, as Warner Bros. has just released the first question from the Q&A as an early sneak preview.

For the first question, a fan, who actor Michael Shannon and director Zack Snyder think looks like Bradley Cooper, asks via video how Michael Shannon prepared to play one of the most badass Superman villains ever in General Zod.

“I’m not really a badass person by nature,” answered Shannon. “But I guess people say I’m good at being scary of something.” Shannon then turned the question over to Snyder, asking why he was selected for the General Zod role.

Snyder replied, “I just felt like you could make him more complicated, like figure out the layers, and like say, ‘You know what, he is not evil, he’s trying to do this thing.’ And so that in the performance it’s not just like, ‘Ha-ha! We’re going to destroy the world.’ But that there’s reason and also he’s conflicted a little bit.”

Director Zack Snyder is currently working on the Man Of Steel follow-up, which everyone seems to be calling Batman Vs. Superman.