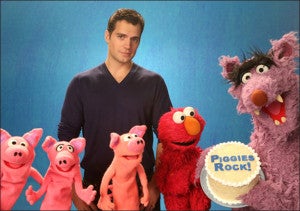 Below via HenryCavill.org, you can see the video of Man of Steel star Henry Cavill appearing with Elmo, the Three Little Pigs and the Big Bad Wolf as part of Sesame Street's "Word on the Street" segment.

In the segment, the cinematic Superman teaches the group about the meaning of respect--something that doesn't jive too well with blowing other people's houses down, incidentally.

While on the set, Cavill also stopped and did a quick photo shoot with Super Grover, which we reported on yesterday.

Check out his segment below.