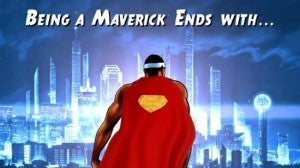 After the first trailers were released for this summer's Man Of Steel, they inspired countless parody and tribute videos on YouTube. It also appears they inspired Dallas Mavericks owner Mark Cuban to put together a video to try to lure center Dwight Howard to sign with the Mavericks.

The video below was part of a much longer presentation that the Mavericks made to Dwight Howard. In the video, Dwight Howard is shown as a Superman-type hero, while the Man Of Steel music plays in the background.

Why did Mark Cuban make a Superman-themed trailer for Dwight Howard? Well, Howard has compared himself to Superman in the past, wearing a red Superman cape during the 2008 NBA Slam Dunk Contest. Also, when the Mavericks asked Howard what his goal was, he responded "I want to be Epic." Of course, things don't get much more epic than the Man Of Steel.

Unfortunately for the Mavericks, all their hard work didn't pay off, and Dwight Howard wound up signing with the Houston Rockets.

Mark Cuban Made Man Of Steel Pitch To Dwight Howard