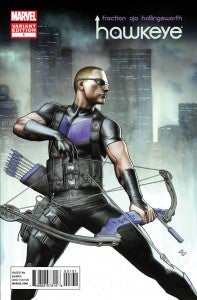 Marvel Comics has released Adi Granov's variant cover to Hawkeye #1. While it's not the super-stylized covers originally shown, it's a more traditional comic book cover with a cool look that shows off Hawkeye's current status as much more closely tied to the look of his movie counterpart. The issue will hit the stands on August 1. Check out the full description from Marvel below.

Marvel is proud to present your first look at superstar artist Adi Granov's variant cover to Hawkeye #1, the start of an all-new ongoing series featuring the breakout star of the hit summer blockbuster! Join self-made hero Hawkeye in a high stakes adventure with the ex-Young Avenger Kate Bishop at his side! Will he be able to prove himself worthy to be called one of Earth's Mightiest Heroes? The red-hot fan favorite team of writer Matt Fraction and artist David Aja reunite to kick off this action packed epic in Hawkeye #1, coming to comic shops everywhere, on the Marvel Comics app, and the Marvel Digital Comics Shop this August. HAWKEYE #1 (JUN120659) HAWKEYE #1 GRANOV VARIANT (JUN120660) Written by MATT FRACTION Pencils & Cover by DAVID AJA Variant Cover by ADI GRANOV FOC – 7/9/2012, On Sale – 8/1/2012