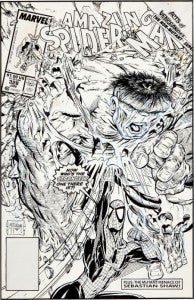 Todd McFarlane's original cover art for The Amazing Spider-Man #328, featuring Spider-Man facing off against The Incredibly Hulk, sold yesterday for a record $657,250, shattering the previous record for a piece of original, American comic book art by more than $200,000, according to a press release from Heritage Auctions. The piece was part of the "The Shamus Modern Masterworks Collection," a collection of 1980s and 1990s-era comics artwork amassed by Martin Shamus, father of Wizard: The Comics Magazine founder Gareb Shamus. "This is an this earth-trembling cover illustration and an equally magnificent price," said Todd Hignite, Vice President of Heritage Auctions. "McFarlane's art brims with the raw energy that sky-rocketed McFarlane to the top of the industry and, now, the top of the auction world." Another piece, McFarlane's cover for Spider-Man #1, sold for $358,500 at the same auction.