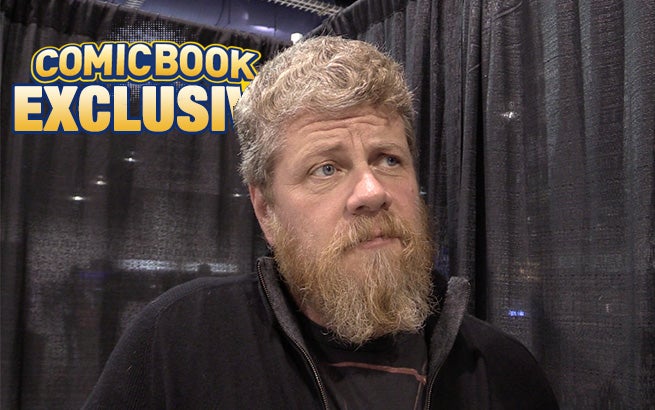 This weekend, Michael Cudlitz - The Walking Dead's Abraham Ford - appeared at the inaugural Wizard World Comic Con Las Vegas. Prior to having a fun filled day signing autographs and taking pictures with die hard fans, he caught up with ComicBook.com for an exclusive interview.

MC: Good, so far! We officially haven't started. We started early today. So, I'm not really officially here yet. Everyone's lining up and they're all in costume. Everyone's having a good time. So, I imagine it will be just like all the other ones - an awesome day meeting fans, hanging out with people who dig comics.

Have you ever met a cosplayer dressed as your character?

It's awesome! I'll pull it up. [pulls up photo on phone] There's always a couple and it's a lot of fun, actually. I think my favorite one is a couple weeks ago, this guy.

Yeah. Everybody has a lot of fun with it. It's just, that's what it's all about: everybody celebrating the comics and stuff that, you know, shared interest. They come out with the family. It's great.

Do you still follow The Walking Dead comic books now that you're on the show?

That was a shocker!

Do you get a little bit nervous about the television series approaching that point in the comic books?

No. They're concurrent worlds. They're very different than each other... Then they're very much the same... Me worrying doesn't make me stay around longer. They'll take me out if and when they want to. I'll just enjoy the time that I'm here.

Is it hard to say goodbye to anybody when they leave? When their character is killed off?

Yeah! I think each episode is like... an hour?

Tell you friends! Each episode of The Walking Dead will be an hour long! Wait... That's not news. Good try Cudlitz! You almost had us.

The Walking Dead returns this fall for it's sixth season, but in the meantime, the hit zombie drama's prequel companion series, Fear The Walking Dead premieres this summer on AMC.