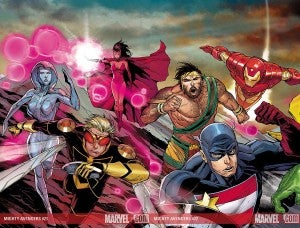 When the Marvel Civil War ended a couple of years ago, the superhero community was beginning to put the pieces back together after being split down the middle over the issue of registering their identities with the government. When the pro-registration/Iron Mad led side won, a new team of Avengers was created, determined to be the face of this new law. With Ms. Marvel at the helm, this group of Mighty Avengers debuted in Mighty Avengers #1, but wait. Weren't there "other" Avengers before this? Great question, glad you asked! After the horrific events of the "Avengers Disassembled" storyline, caused by the psychotic breakdown of the Scarlet Witch, the slate was cleared, for better or worse in the eyes of fans, for a new team to come together. That would happen with the debut of issue number one of The New Avengers, an interesting team made up of members such as Spider-Woman, Wolverine, Luke Cage and Iron Man. From the start, The New Avengers positioned itself as a dynamic book with an interesting mix of humor, plenty of action and strong amounts of character interplay that was believable. The Marvel Civil War made them hunted by the Mighty Avengers, then came the Skrull invasion. With that, everything changed for both teams, but only one has been able to maintain the narrative edge.

While both books have their own distinct voices and styles, The New Avengers remains the superior book. The New Avengers doesn't appear to have ever suffered from some of the struggles that Mighty Avengers has, such as a top down restructuring of the team. While this would be an interesting plot point or story arc, it still seems that New Avengers would recover from such an event well while Mighty Avengers never seems to have been able to fully integrate the team with members such as U.S.Agent, Stature, Vision and Jocasta coming into the fold under Hank Pym's leadership. Pym's taking up the mantle of the Wasp to honor his beloved Janet is noble, and he has chosen some good teammates, but his fits and starts as leader of this team have not made for compelling reading as a whole, slowing down any forward motion a new team may have provided. While New Avengers has been able to incorporate long-departed Mockingbird and Spider-Woman, as well as a newly pledged Ms. Marvel, Mighty has struggled to do the same with this new group of established and lesser-known characters. Too many things have happened in the brief history of the Mighty, and it seems to have resulted in too many shake-ups/changes in direction for the series to handle. It hasn't seemed to find a steady footing in the first few issues before the Skrull invasion. The death of the Wasp served as a great wiping of the slate for a new direction and clarity for the series, even though it was the death of an iconic Avenger. Henry Pym formed a new team around the memory of Janet van Dyne, but so far the cohesion hasn't happened. Meanwhile, the New Avengers continue to hone their bond, even though their ranks are currently being tested by Clint Barton, Ronin, and his quest for revenge on Norman Osborn. Narratively, New Avengers has just been consistently tighter and more well-oiled in its story arcs than New Avengers. There's always existed a clarity of voice, character and action in the storylines that New Avengers has produced, such as their first encounter with the Wrecking Crew, their trip to find Elektra, and most recently the events surrounding the emergence of the new Sorcerer Supreme. The stories in New Avengers feel like they have resonance, importance to the characters and the Marvel universe as a whole. There didn't seem to be a sense of urgency in the latest stories involving Chthon, a god of dark magic, and now the latest involving a brewing showdown with the Inhumans and an outcast king. Even their recent encounter with Norman Osborn felt a bit ho-hum. One key thing to mention is that the current lineup of the Mighty Avengers has been orchestrated by the Scarlet Witch, secretly the god/goddess of mischief Loki in disguise. There's hope that all of these past several issue have been leading to something big and meaningful, but so far it hasn't really felt that way. It may be a case of the series just coming at a bad time, with the events of the Skrull invasion stopping the buildup of the series in its tracks. Perhaps the next issues involving the Inhuman connection will bring this more into the forefront, but all the while New Avengers continues to move forward with more relevance, clarity and purpose. Mighty Avengers may catch up, but how many more chances can they have?

"Mighty" vs. "New": A Tale of Two Avengers Series