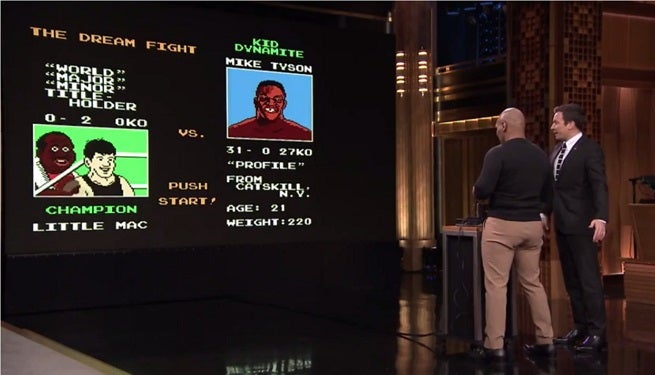 Mike Tyson is known for a lot of things, but many video game players who grew up in the 1980s immediately relate "Iron Mike" to the Nintendo Entertainment System video game, Mike Tyson's Punch-Out!

The game was the first home console version first home console game in the Punch-Out! series, which began in arcades in 1983, and provided players with a fun and challenging boxing simulation that featured lots of colorful (if sometimes racially insensitive) characters.

Tyson himself was one such character, the game's final matchup. The battle was notoriously difficult because you only had one chance to succeed before receiving a "game over" and having to start again from the beginning.

On an episode of The Tonight Show earlier this week, host Jimmy Fallon decided to pit Tyson against Tyson and see if even Mike Tyson himself could beat Mike Tyson on his very first try.

Turns out, not so much.

Jimmy persuades Mike Tyson to take on his Nintendo self in Mike Tyson's Punch-Out!!