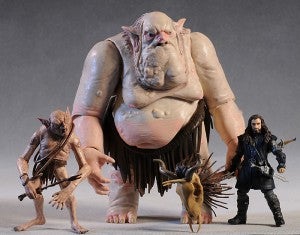 More hints at what to expect from the upcoming film The Hobbit: An Unexpected Journey, from our source in the action figure aisle at Toys R Us:

As with the Tauriel stuff earlier today, most of this is actually pretty much an open secret to people who have read the books, but there's some material here that informs the ways in which the movie will either deviate from the book, or what touchstones in the book will appear in what movie.

The Hobbit: An Unexpected Journey is due in theaters on December 14, 2012. The first of three films adapting J.R.R. Tolkien's classic precursor to The Lord of the Rings, it stars Ian McKellen, Martin Freeman, Andy Serkis and Benedict Cumberbatch.

"Holding Out for a Hero" Trends After Being Used in Loki, Guardians of the Galaxy, and Masters of the Universe

The Legend of Zelda: Breath of the Wild 2 Is Already Up for Pre-Order