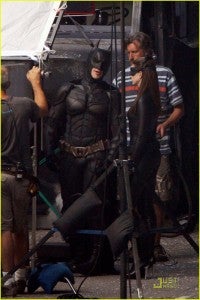 Once more around the Internet for comics movie news too small to be a full story but too neat to ignore:

The folks over at Just Jared have made stalking the set of The Dark Knight Rises a full-time gig recently and turned out some pretty cool photos and video as a result. The latest? Anne Hathaway decked out in a different Catwoman outfit from the one we've seen. There's speculation as to whether the "ears" on her costume are really just part of the already-seen goggles from previous Catwoman images, but either way the addition of the mask raises interesting questions about how much the movie will gravitate toward the comics version of things and a little less in the more grounded take that director Chris Nolan has always strove for.

From DC to Marvel, Thor 2 is apparently well into the scripting phase, and MTV's Splash Page is speculating about whether comments made by folks close to the production mean fans can look forward to seeing more of Marvel's "cosmic universe" characters and concepts in the film. Of course, it's all based on comments producer Kevin Feige made to Entertainment Weekly about Thor visiting "other worlds" in the sequel. Of course, to think of that as traditional space travel versus simply exploring the Nine Realms as described in the first Thor film (new to DVD and Blu-Ray this week) seems it may be missing the point, but Splash Page links the two and suggests the movie might as well.

Meanwhile, Bleeding Cool is reporting that not only is Red 2 happening, but that at least Helen Mirren is on board for the film. She announced on The Jonathan Ross Show and, matter-of-factly, said that they're doing the film next year. In spite of follow-up stories done by Warren Ellis and Cully Hamner (creators of the original Red comics), apparently the plan at present is to have the screenwriters who adapted the first film write a new story all their own.