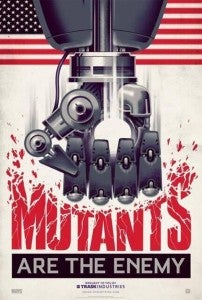 Earlier today, Comicbook.com ran a story about how director James Mangold plans to release an unrated version of The Wolverine on Blu-Ray, which will contain more blood and violence. Even though The Wolverine has a PG-13 for its theatrical release, it turns out that some violent scenes did make it past the ratings board for a very interesting reason. Be warned that what follows might be considered a mild spoiler.

In the same interview with Digital Spy where Mangold talked about the unrated version of The Wolverine, he also talked about a particularly violent scene where Logan plunged his hand into his chest, which did make it past the ratings board.

James Mangold explained, “I was amazed that we got that through. At one point we saw a little more of the cut in his chest, but the way the rules work in the States is they're not human, you're not held to the same standard as if they were human, so it was almost an act of convenient anti-mutant-ness! The MPAA views mutants as less than human, and therefore their pain is not worth as much of our anxiety, or not as troubling to children. But that did work to my benefit, so I shouldn't criticize it too much!”

Considering that mutant persecution and anti-mutant propaganda has been a major story line in the X-Men comic books and movies, the MPAA views on mutants seem somewhat ironic. If super-powered mutants did really exist in the world, then maybe the whole X-Men: Days Of Future Past storyline isn’t that far-fetched.