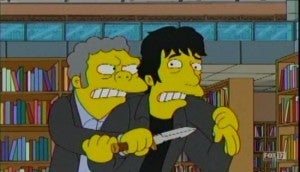 On his Facebook account, Neil Gaiman has announced to his fans that his next book--aimed at "grown-ups," not a children's book as he does every so often--will be called The Ocean at the End of the Lane. Said the Sandman writer: "Psst. The title of my new novel for adults, which will be published in the US and the UK in the summer of 2013, is The Ocean at the End of the Lane." He didn't provide any further details on the book, which will hit in the same calendar year as his first board book, Chu's Day, which is the first of five books he's signed on to do for publisher HarperCollins. He'll also, as announced at San Diego Comic-Con International last month, be writing Sandman for DC/Vertigo with artist J.H. Williams III on board for the miniseries. "When I finished writing The Sandman, there was one tale still untold," Gaiman explained back in July. "The story of what had happened to Morpheus to allow him to be so easily captured in The Sandman #1, and why he was returned from far away, exhausted beyond imagining, and dressed for war. It was a story that we discussed telling for Sandman's 20th anniversary… but the time got away from us. And now, with Sandman's 25th anniversary year coming up, I'm delighted, and nervous, that that story is finally going to be told."

Neil Gaiman Spills Title of His Next Book