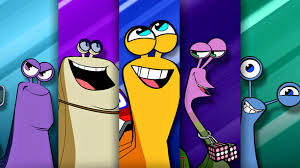 , the CG-animated feature starring Green Lantern's Ryan Reynolds and released theatrically earlier this year to middling commercial and critical success, will serve as the basis for a new animated series on Netflix, which launched this morning.

Titled Turbo FAST, the show launched with an initial five episodes, which look to share Dan Vs.'s Flash-animated style, rather than either hand-drawn or the kind of fully-rendered CGI that fans of theatrically-released animation are used to.

The first Netflix original series aimed at kids, the series is described as follows: "Join Turbo and his posse on the Turbo Fast Action Stunt Team. Filled with outrageous comedy, action and laugh out loud fun, Turbo FAST amps up everything to the extreme: extreme adventures, extreme challenges, and extreme excitement."

Reynolds doesn't return to voice Turbo in the animated series; that job falls to Reid Scott, best known for his roles on live-action TV comedies like My Boys and Veep. Futurama's Phil LaMarr and Star Wars's Mark Hamill also star.