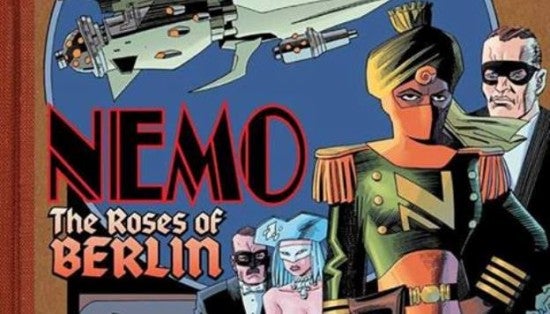 Top Shelf Comix and Knockabout will release a new volume of Alan Moore and Kevin O'Neill's critically-acclaimed League of Extrarordinary Gentlemen series in 2014, the Forbidden Planet blog reports (via Ben Grimm). In the story--titled Nemo: The Roses of Berlin--the League will face off against the Twilight Heroes, a twisted parody of their own group, under the instruction of German dictator Adenoid Hynkel. For those who think that just sounds like a cheap way of not saying "Adolf Hitler," it is--but it's not Moore's cheap way. 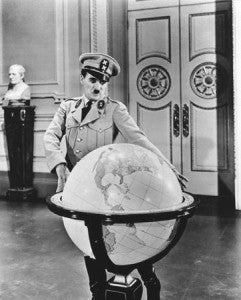 In fact, Hynkel is the cartoonish send-up of Hitler created by Charlie Chaplin in his classic film The Great Dictator--his most commercially successful film, and one of the only "talkies" (movies with synced sound rather than silent movies) that carried on the box office dominance that Chaplin had enjoyed before the technology changed. While Chaplin's film courted controversy by attacking fascism (and particularly Hitler) at a time when the U.S. wasn't yet involved in World War II, Moore is going after a different kind of sacred cow: Chaplin's film is considered a classic of American cinema, listed as one of the American Film Institute's 100 greatest comedies of all time and one of the U.K.'s 100 favorite movies ever made. It also started a decades-long tradition, as it was the first major work of art to use Hitler as its central antagonist. Certainly, too, Moore's League of Extraordinary Gentlemen hasn't tackled the tone of The Great Dictator's humor before--it will be interesting to see how the two worlds bump up against each other. It seems as though, following in the footsteps of Nemo: Heart of Ice, the new volume will be released as an original graphic novel. That makes just over a year between League stories (along with a TV series in development and a recently-released new printing coming out of DC Comics collecting the early volumes). For those of you keeping score at home, this isn't the first connection between Chaplin and comics: the Hollywood legend was portrayed onscreen by Iron Man's Robert Downey, Jr. You can check out the cover and solicitation text below. 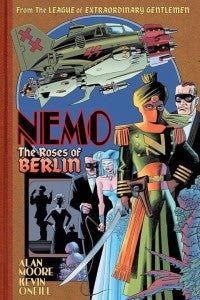 From The League of Extraordinary Gentlemen! Sixteen years ago, notorious science-brigand Janni Nemo journeyed into the frozen reaches of Antarctica to resolve her father's weighty legacy in a storm of madness and loss, barely escaping with her Nautilus and her life. Now it is 1941, and with her daughter strategically married into the family of aerial warlord Jean Robur, Janni's raiders have only limited contact with the military might of the clownish German-Tomanian dictator Adenoid Hynkel. But when the pirate queen learns that her loved ones are held hostage in the nightmarish Berlin, she has no choice save to intervene directly, travelling with her ageing lover Broad Arrow Jack into the belly of the beastly metropolis. Within that alienated city await monsters, criminals, and legends, including the remaining vestiges of Germany's notorious 'Twilight Heroes', a dark Teutonic counterpart to Mina Murray's League of Extraordinary Gentlemen. And waiting at the far end of this gauntlet of alarming adversaries there is something much, much worse. Continuing in the thrilling tradition of Heart of Ice, Alan Moore and Kevin O'Neill rampage through twentieth-century culture in a blazing new adventure, set in a city of totalitarian shadows and mechanical nightmares. Cultures clash and lives are lost in the explosive collision of four unforgettable women, lost in the black and bloody alleyways where thrive The Roses of Berlin.