As May and June ground on, it's becoming clearer and clearer that almost nobody can keep up with every article we write on the site anymore; the amount of content we're generating just keeps going up (help, help, they've got me chained to this computer) and so we thought it would be a good idea to hit the high points of the last seven days or so again, once a week, for each movie/TV news and for comic book news. The articles will start running on the weekends during the slow news time, although this week as we get it off the ground, we're going to do movies on Tuesday and comics on Wednesday, so that by the time the new product is in your local retail stores for each of those products, we're catching you up. 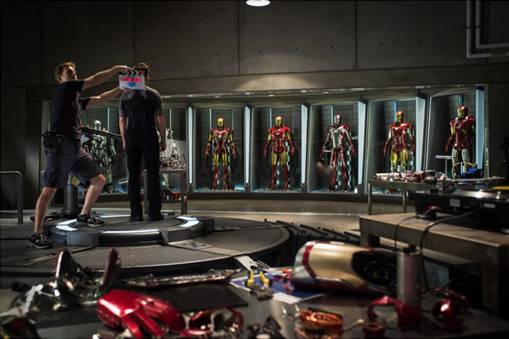 Beginning with Monday of last week, there were Iron Man 3 set photos, both of the official variety (the first yet released!) and from our man on the ground in Cary, North Carolina, where they were filming. A car chase or road race was scrapped due to inclement weather, but that doesn't mean we didn't get any news last week. We discovered that A.I.M. will play a role in the film, that it will take place on or around Christmas and that Don Cheadle's Rhodey will wear an updated War Machine suit which is painted to look like the Iron Patriot armor from the comics (and which may or may not carry a name change with it). Plus, Gwyneth Paltrow showed up to start shooting Pepper Potts' scenes. And, apparently, there's a plane crash which may or may not involve the Vice President. A week before they went on sale today, The Dark Knight Rises tickets were announced for a presale, which was then supported by a new TV spot that played up the benefits of ordering ahead and gave fans a really good look at the Bat, Batman's new flying vehicle from the film. A new book on the film also gave up a few minor spoilers, including the fate of Ra's al Ghul and the nature of the scene Liam Neeson filmed for the sequel. Even Chris Hemsworth from The Avengers wants to see it!

The Dark Knight Rises: Five Things We Want to See

We spoke with IMDb's Keith Simanton for our monthly look at the box office and the film industry. The first half of the conversation revolved around Men in Black 3, which he said all but ensured that Sony wasn't rushing to make another one anytime soon, and the second half discussed the prospects for June's box office, including Snow White and the Huntsman and Prometheus. By Tuesday, the comics Internet was buzzing with the news that Black Panther is slated to be Marvel's next solo superhero film. 20th Century Fox followed up by registering the title Days of Future Past with the MPAA as a potential name for their sequel to X-Men: First Class. That title resonates with comic book fans in a big way, and was the talk of the town for a few hours before Warner Brothers countered with a pair of DC announcements, telling reporters that they had lined up writers not only for the perpetually-in-development Wonder Woman film, but also for Justice League. Shortly thereafter, the DC movie floodgates opened, with a story that suggested they want to develop Suicide Squad and Aquaman movies while they considered rebooting Green Lantern.

Captain America 2got a directorial team

in the form of the Russo Brothers (of Arrested Development and Community fame) and Thor 2 got a new Fandral, while The Amazing Spider-Man went a little clip happy. Oh, and there was a stunt featurette, followed by an extended production diary for Spidey, too, in case there was any doubt they were chomping at the bit for the July 4th weekend release. We also found out that it is being designed to tie into the upcoming Venom movie, rumored to be directed by Chronicle's Josh Trank. Not long after a fan-made trailer for Prometheus knocked everybody's socks off, including Fox's, the movie's co-writer Damon Lindelof teased the possibility of a sequel, but said that they would be doing it without him if they did. What WILL Lindelof be writing? Apparently a new pass at World War Z, which is going back for reshoots.

Michael Bay announced that he would not direct another Transformers movie after Transformers 4 is finished, but that his team will start filming Ninja Turtles in September or October.