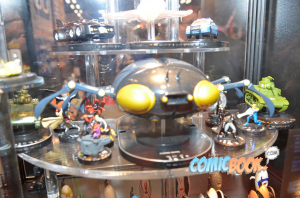 One of the great things about comic book conventions is that you get an early look at some of the comics, toys and other goodies that are coming soon. In this case, though, one has to wonder whether the toys and other goodies may be telling us something we don't yet know about the comics. At right, you can see a HeroClix set that features the New 52 iterations of characters like Nightwing, Booster Gold and even the Haunted Tank...but the most obvious feature of the set, seen right in the middle, is The Bug. 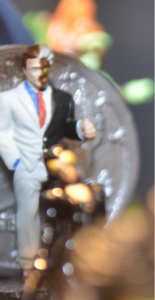 For the uninitiated, that's Ted Kord's private aircraft, used in his Blue Beetle identity and most recently seen in preview pages for Grant Morrison's Multiversity. Kord has yet to appear in the DC Universe post New 52, and DC Co-Publisher Dan DiDio told fans on his Facebook page that he "was never around." Kord is one of a handful of characters beloved by a small group of fans but not popular enough with a broad enough base of readers to convince DC to use them right away following the New 52 reboot. Characters like Stephanie Brown, Cassandra Cain and Wally West were alive at the time of the reboot, though, while Kord had already been killed, so it seems a tad odd for him to appear in the revised timeline before those others. It may be equally likely that this game piece is reflective of his appearance in Multiversity, though. Also visible is Two-Face. The classic Batman villain will appear in 2013 as part  the Death of the Family stories in Batman, according to Scott Snyder. He also recently appeared in the Walt Simonson original graphic novel The Judas Coin. The figurine at left shows a version of Two-Face not much different than his pre-New 52 look, except maybe that the "wild" side of his suit is much more sedate, opting instead for a light and dark motif.

New York Comic Con: Is This the New 52 Two-Face and Ted Kord?