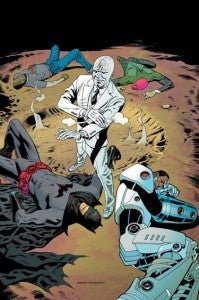 Amid all of the controversy over "gendercrunching the New 52," one of the things that DC co-publisher Dan DiDio did several times was to allude to the "next wave" of new titles. It has left me wondering if, sometime between six months and a year from now, DC may try and replicate some of the excitement of the New 52 by launching another "wave" of new #1s (probably around the same time they cancel a few underperforming titles from the initial phase). There are some obvious choices for the next wave—things like the Justice Society and the Marvel family have very vocal fans who are pretty upset that they haven't got a presence in the DC Universe at present, and characters like Wally West have been asked after by fans more than anyone probably expected. But if DC were serious about a new "wave" of titles to create a new wave of publicity, what could they choose? I'm going with the assumption here that they aren't ready quite yet to flood the market with another fifty-plus new titles. But between their average numbers over the last several months (Flashpoint and RetroActive notwithstanding) and, say, a half-dozen or so titles probably getting the ax shortly after the six-month mark, I've come up with half the original number—26 total titles—and divided them into title "families" to indicate where I feel they might fit best. For the purposes of this discussion, I'm taking for granted the rumor, recently reported by Bleeding Cool, that Nicola Scott and James Robinson are working on a Justice Society title, and giving the Justice Society its own "family" as well. As the story runs quite long, I'll break it up over two parts to give readers an opportunity to read and respond to each thirteen and not get lost along the way. Contained in today's portion will be the Justice League and Justice Society families of titles, as well as the first couple of "Young Justice" books I would propose if I had to figure out what properties were valuable in the long-term, what might sell and what chances might be cool and exciting to take. Justice League Azrael - There are a couple of options here, but the bottom line is, it's a valuable property. If it were me, I would use Mark Shaw, one-time Manhunter, schizophrenic and sometime supervillain. His archenemy, Dumas, wore the sigil of Azrael's order and part of Mark's efforts to overcome that personality's influence on him (there was a bit of Captain Marvel/Sentry going on there) was to visit the Order of St. Dumas personally. Readers never found out what came of that, after the demise of the much-loved Manhunter monthly, but I'd be willing to bet Marc Andreyko could be persuaded to come back to DC and finish that character's arc. Coming with a strong built-in supporting cast and a writer in Andreyko who has shown a real skill with the character, it could be a surprise hit, keeping the name and property alive while divorcing themselves from both the Joe Quesada design for the character (which has always been rumored as a sticking point for DC) and Jean-Paul Valley's questionable history with Batman and apparent death. Cyborg - With all the talk about race lately, let's skim over this obvious and 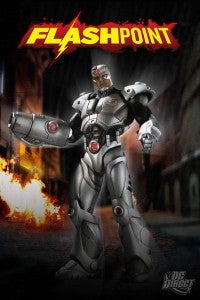 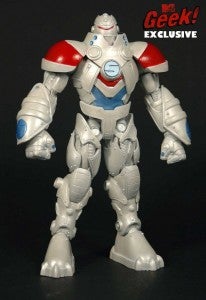 [/caption] Stars and S.T.R.I.P.E. - Another obvious choice, not only because Mattel inadvertently revealed art of an upcoming S.T.R.I.P.E. Toy that doesn't look much like the old outfit (and said it would be seen soon in the comics), but because the characters were created by Johns and Stargirl has become a fan favorite, helping to shape the feel and direction of the last few JSA series and appearing as the de facto founder of the next generation of JSA'ers on TV's Smallville. Young Justice H-E-R-O – Like Chase, this title is well-loved and much-missed by its small and passionate fanbase after its too-short late '90s run. Unlike Chase, neither its main characters or the MacGuffin that drove the series have really appeared anywhere since (excepting a one-issue appearance in Brave & the Bold, I think, but there may have been time-travel involved). It's a story with huge potential for creativity and always felt to me like a natural companion to Resurrection Man, should that series survive...or a replacement for it if Abnett and Lanning end up sending him back to his grave again. Kamandi – With the Planet of the Apes franchise being relaunched, why not relaunch DC's imitation? Plus, the Kamandi feature in Wednesday Comics was one of the best-received bits in it, and Jack Kirby's Kamandi Omnibus is coming soon to a comic shop near you. Add that together with the fact that the character was shown to be part of the DC Universe proper again in Final Crisis and you get a combination that offers a lot of potential. Tomorrow--the rest of my ideas, including at least one DC property you've probably never heard of--but that has a lot of potential.

Next For The DC Comics New Universe? Some ideas...!