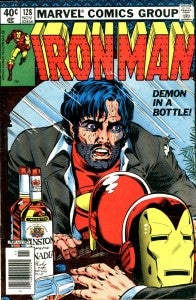 While director Shane Black, who is helming the upcoming Iron Man 3 for Marvel Studios, apparently sees most superhero films as "bland" and intends to reverse that trend by keeping the Iron Man franchise vital, there's a central, fascinating aspect of Tony Stark's character he won't be exploring in his film: Iron Man's alcoholism.

So far, we've seen Tony drinking and womanizing quite a bit in the film adaptations, and fans have wondered openly about when or if the film version of Iron Man would address the famous "Demon in a Bottle" storyline. Speaking to Comic Book Resources at last weekend's Long Beach Comic Con, the filmmaker said that "If you go there, you really have to go there. The film then becomes about that, because the journey that involves recovering from alcoholism is an entire movie."

"That's maybe not where we want to be," Black said of what he describes as "Tony's descent into alcoholic madness." Certainly it's not where the toy and merchandising licenses want to be. While certainly Black's perspective is a legitimate one, it does raise an interesting question. Comic book characters, with decades of backstory and elaborate histories that make them "real" people to many longtime readers, have flaws which, frankly, cannot be quickly or easily dismissed or boiled down to a soundbyte for a trailer.

Iron Man is hardly alone; Hal Jordan's drunk-driving arrest in Emerald Dawn was retconned out of existence in the comics shortly before the Green Lantern film went into production and, despite the series's popularity among fans, it was a more Geoff Johns-inspired version of Hal that finally saw the silver screen. I'd say the odds of seeing Hal go bad and obliterate the Green Lantern Corps as Parallax in a future film are basically zero as well, in spite of the fact that Warner Brothers greenlit Green Lantern 2 earlier this year.

Will such stories ever make it off the printed page and find the larger audience of feature films and TV shows? It seems impossible. "Demon in a Bottle" was, for years, the defining story of Iron Man's career (it remains so to many fans, especially those who refuse to acknowledge the existence of Civil War). The idea that a fairly thoughtful filmmaker like Black finds the tale too daunting to tell without sacrificing the action-driven narrative of the superhero film certainly doesn't say a lot for Hollywood's willingness to take on some of the "harder" tales of the DC and Marvel canon.