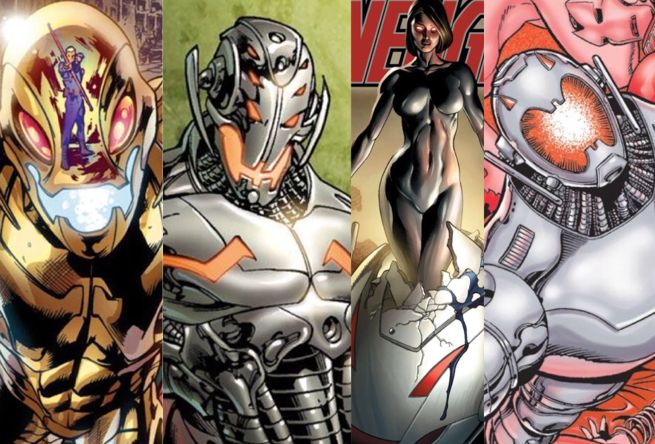 The comic book community has been hit with a wave of Ultron-mania after Marvel released its first trailer for next summer’s surefire blockbuster, Avengers: Age of Ultron. In the trailer, fans got an extended look at one of Marvel’s greatest rogues, Ultron, who will be voiced by Emmy Award-winning actor James Spader. Judging from the two-and-a-half minutes worth of footage provided in the sneak peek, the Avengers are certain to have their hands full with this killer robot.

For those fans who can’t wait until May and want a more immediate sense of how much of a threat (and sociopath) Ultron is, here are five essential Avengers/Ultron comic book storylines to tide you over. 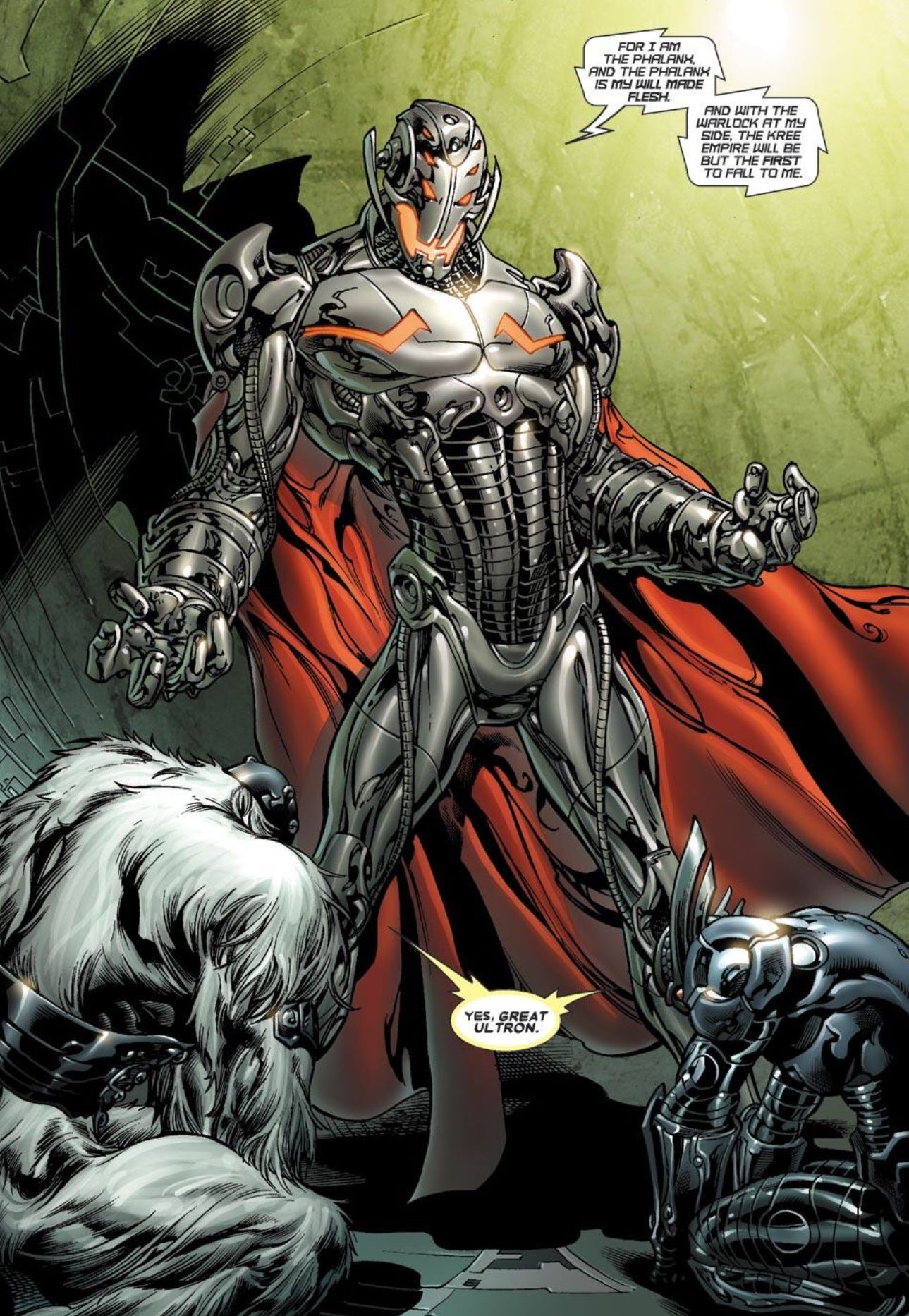 This 2007-08 crossover storyline by Marvel’s modern day cosmic-ologists, Dan Abnett and Andy Lanning, doesn’t pit Ultron against the Avengers, but it does see him do battle with another Marvel property that’s quite hot on the cinematic front. As a sequel to Annihilation, this story sees a ragtag group of heroes (i.e. Peter Quill, Rocket Raccoon, Drax, Gamora and Groot) that would eventually be spun off into the all-new Guardians of the Galaxy. The group fights to protect the galaxy from the Phalanx, a cybernetic species that is being led by Ultron.

It’s doubtful that Marvel Studios will go the cosmic route with Ultron after Avengers: Age of Ultron, but if there are readers out there who want to read more about Ultron and the Guardians of the Galaxy, Annihilation: Conquest is a great place to start. 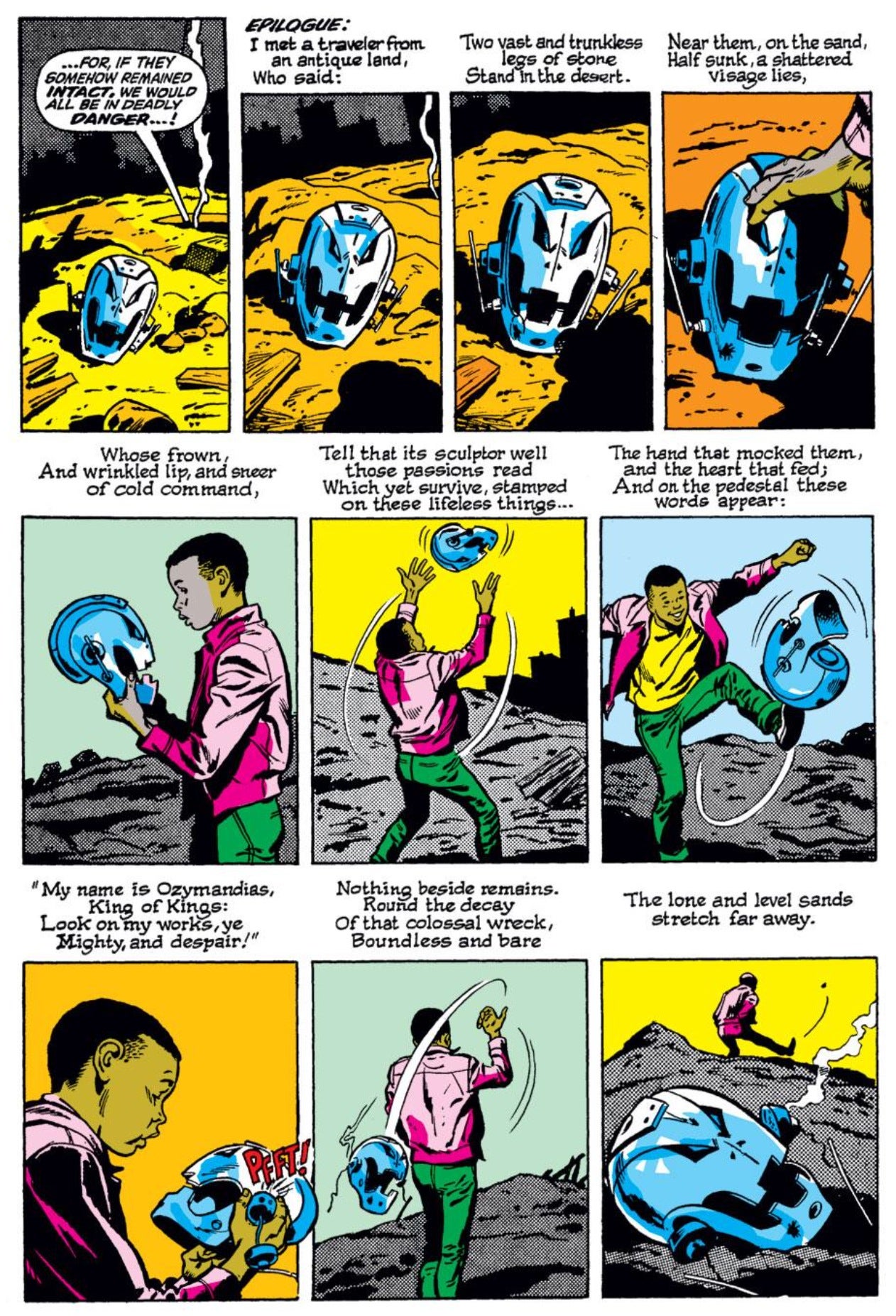 Not only an essential Ultron read, Avengers #54-58 is considered one of the all-time great Avengers stories and is responsible for introducing both Ultron and the heroic android, Vision. Crafted by the legendary Roy Thomas/John Buscema creative team, the four issues explain the full origins for these two iconic Marvel characters, including how Hank Pym invented Ultron, only for Ultron to turn around and create Vision (using Wonder Man’s brain patterns) to destroy the Avengers.

Ultron, who leads a new iteration of the Masters of Evil supervillain team for the first part of the arc, doesn’t come across as the game-changing threat he would later become, but there’s definitely an indescribable “spark” to the character indicating that he is someone for readers to pay attention to down the road. And the ending to Avengers #58 involving the Vision joining the Avengers (aka, “even an Android can cry”) is rightly considered one of the greatest Marvel moments of the Silver Age. 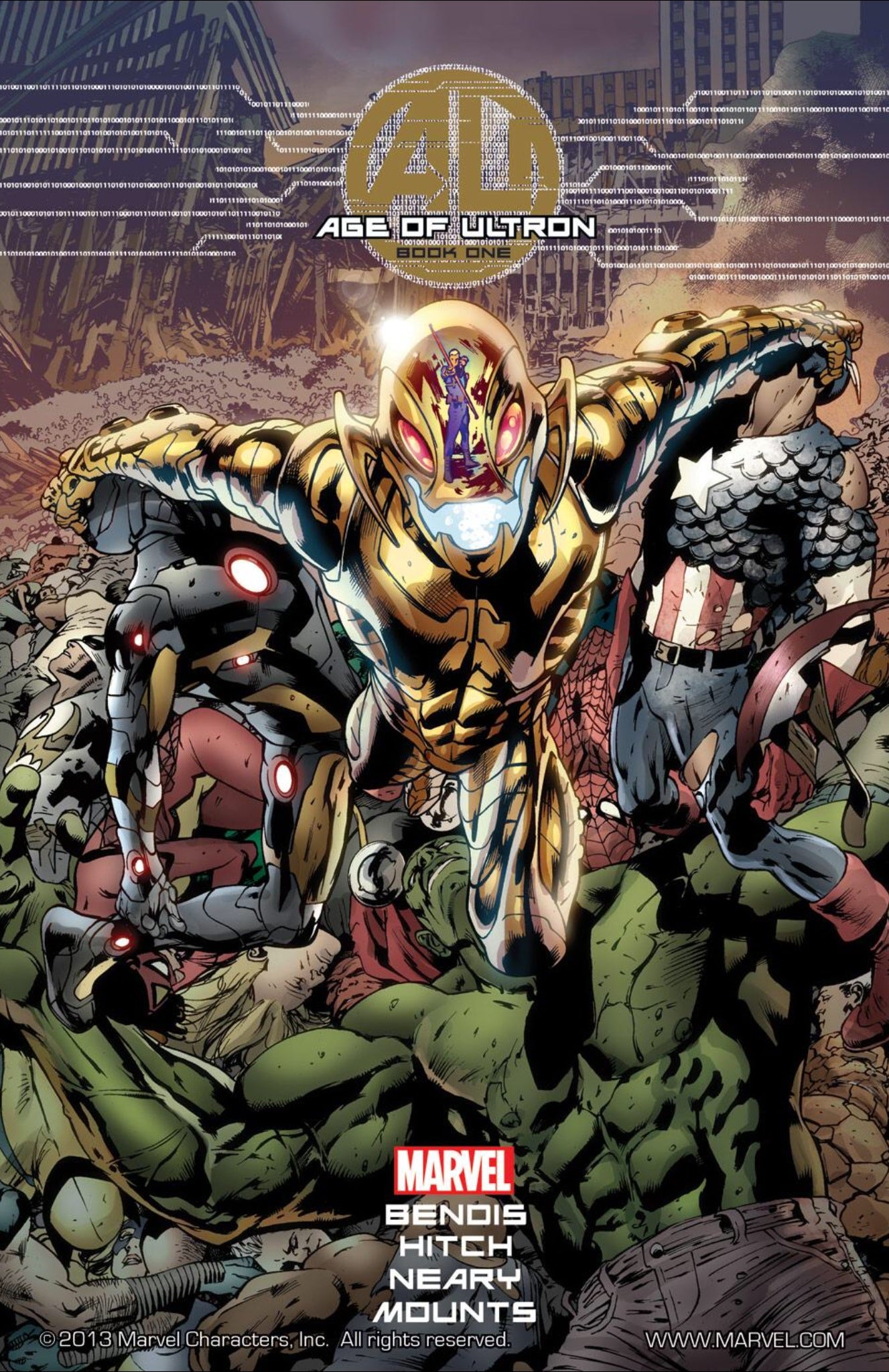 While the sequel to The Avengers has incorporated the namesake of this 2013 miniseries (by Brian Michael Bendis and Bryan Hitch), the similarities are likely to stop there. The comic book iteration of Age of Ultron is set on a dystopian Earth where Ultron has taken complete control. Any surviving heroes are being hunted and killed by Ultron and his army of sentinels. Over the course of the story, the heroes debate two possible courses of action to defeat Ultron – going into the future and attacking him there, or (more controversially) going back in time to kill his inventor, Hank Pym. When Wolverine independently decides on the latter, another alternative dystopian timeline is created.

The miniseries is notorious for its anti-climatic ending that was shrouded in secret by the creators (the last issue was even published in a black polybag to prevent spoilers). But with all of its timeline jumping and butterfly-effecting, the series has unquestionably had an impact on the Marvel Universe over the past year and a half, which makes this a vital read for current fans. Plus, Age of Ultron is representative of Marvel’s most recent Ultron-centric story (until the company inevitably publishes a new Ultron story in time for next summer’s film). 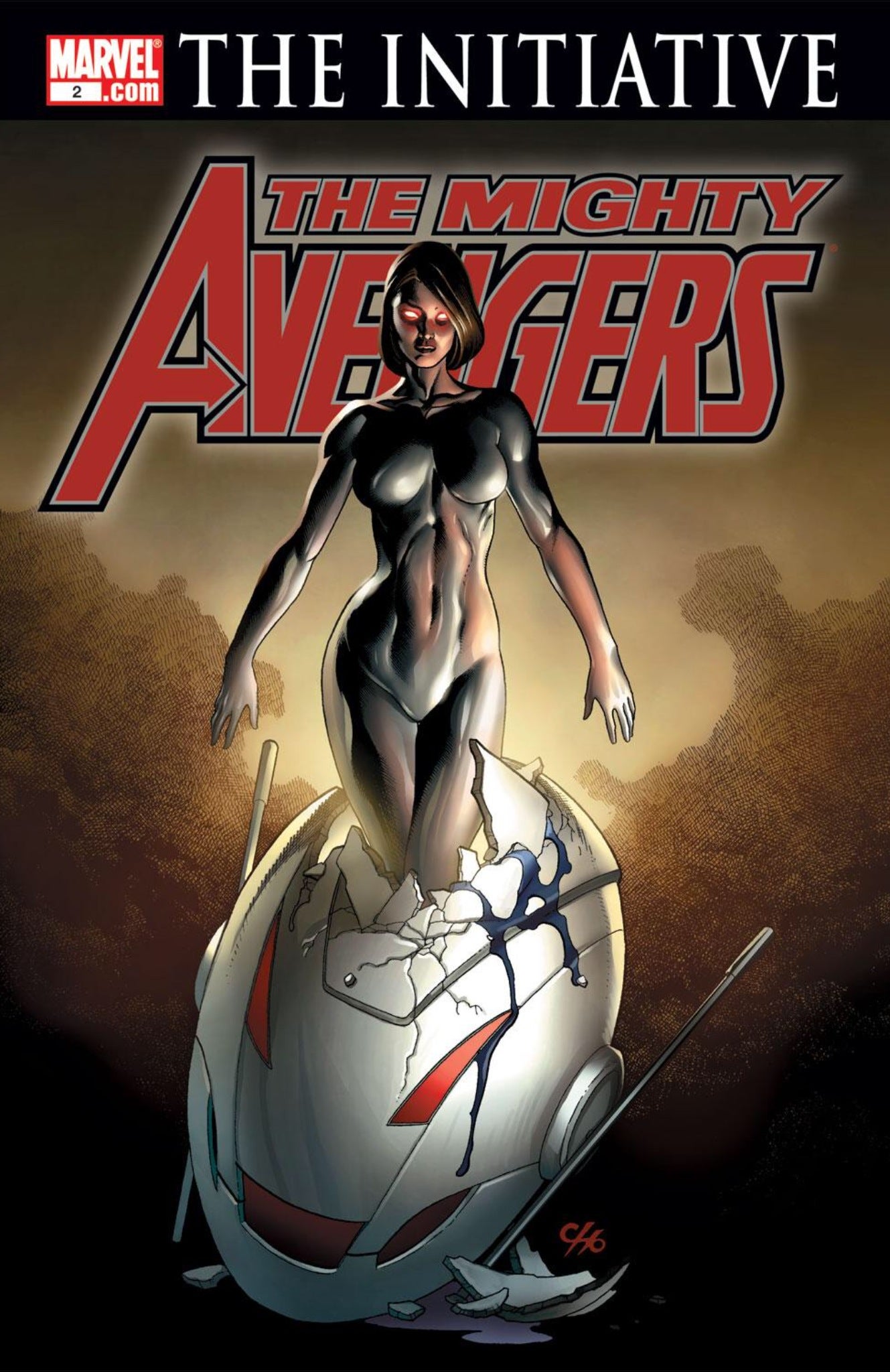 With all reports indicating that the movie version of Ultron will be invented by Tony Stark/Iron Man (rather than Hank Pym as in the comics), it would probably be worthwhile for readers to check out an arc that specifically focuses on the Ultron/Iron Man dynamic. This 2007 arc, by Brian Michael Bendis, with art from Frank Cho, is the inaugural storyline for The Mighty Avengers series – a government-sanctioned group of “Earth’s Mightiest Heroes” following the fallout out of Marvel’s Civil War event.

What makes “The Ultron Initiative” such an interesting read is how it presents Stark, who, at this point, was still regarded by many fans (and other heroes in the Marvel Universe) as a bit of traitor for the way he turned his back on Steve Rogers/Captain America and sided with the government during Civil War. To drum up a little sympathy for Stark, the central conflict of the arc is that Ultron has taken possession of Iron Man’s armor and transformed Tony into … a robotic woman. That bears a striking resemblance to Janet Van Dyne (aka, the Wasp).

So perhaps the story is a touch on the weirder side, but “The Ultron Initiative” is also oddly compelling, especially the resolution of Tony’s predicament, which Bendis uses as an opportunity to pay homage to a classic Roy Thomas Avengers story that originally featured Ant-Man and the Vision. 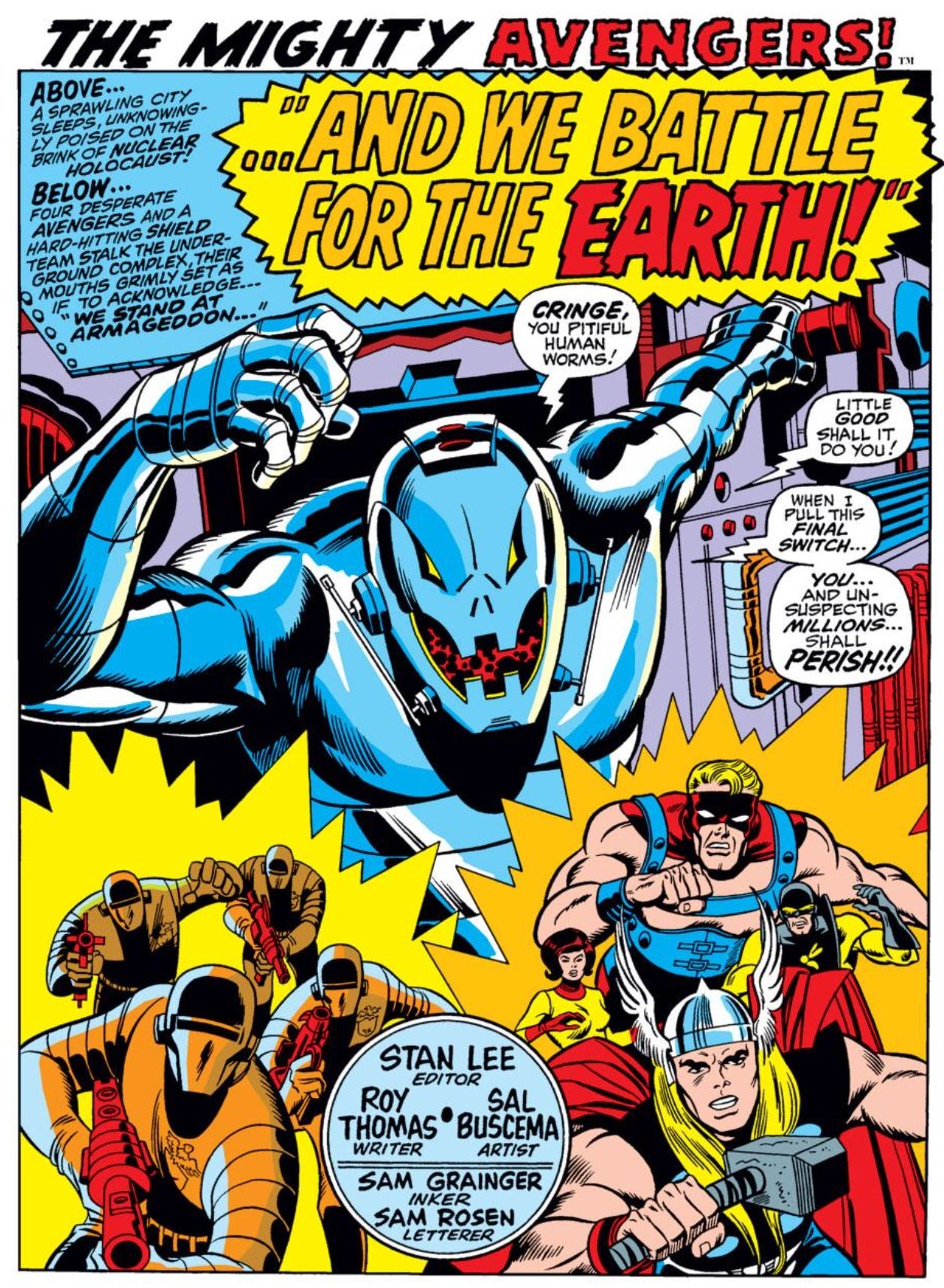 The storyline that truly cemented Ultron as one of Marvel’s premiere big bads capable of causing significant chaos and destruction in the Marvel Universe. This Roy Thomas/Sal Buscema arc marks the second full storyline to feature the sociopathic robot. But this time around, Ultron brainwashes the Vision to obtain a brand new, indestructible metallic alloy called adamantium (ever hear of it?). From there, Ultron builds a new outer shell for himself and dares the Avengers to stop him (which they futilely try to do).

In order to defeat him, Hank Pym basically has to outsmart his creation, zeroing in on Ultron’s uncontrollable bloodlust to scramble his brains and cause him to self-destruct. The Avengers also get a major assist from Black Panther and his supply of ultra-powerful vibranium. Perhaps this subplot will factor into Avengers: Age of Ultron considering how after seeing Andy Serkis in the film’s trailer, many fans are speculating the actor will portray Black Panther nemesis Ulysses Klaw. 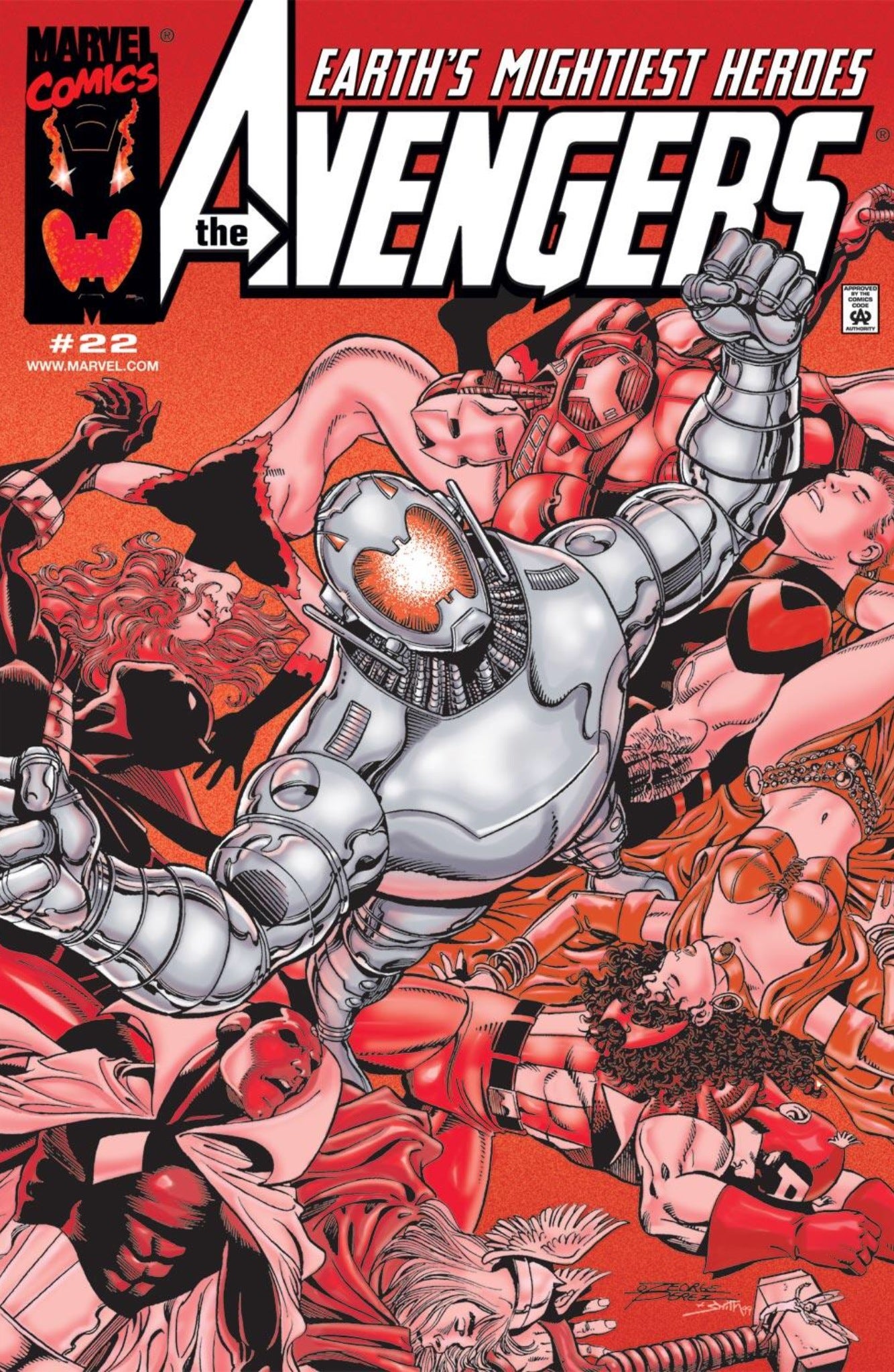 The grand-daddy of them all when it comes to the adamantium-plated supervillain, and arguably (though who’s really arguing) the greatest Ultron/Avengers story ever written. The Kurt Busiek/George Perez dream team who revitalized the Avengers franchise after the disastrous “Heroes Reborn” reboot of the mid-90s, depict Ultron at his most sadistic and threatening. The arc kicks off with Ultron demolishing the populace of an entire country – an ENTIRE COUNTRY – and builds an army killer drones with the remains. Needless to say, the Avengers are none too pleased with Ultron’s actions, but also struggle to find a way to stop him.

As exhilarating as “Ultron Unlimited” kicks off, it ends in even more epic fashion. After the Avengers fight through an army of Ultron drones to rescue some of their teammates, the haggard bunch busts through a wall into Ultron’s lair. That’s when Thor very dryly says, “Ultron, we would have words with thee!” – just a phenomenal comic book moment that will very likely find its way into Avengers: Age of Ultron given its iconography.