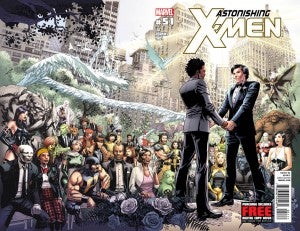 It's probably telling that months ago, when rumblings began in the comic book industry that Northstar and his boyfriend would be married in this week's Astonishing X-Men #51, there was very little in the way of controversy. The character of Northstar was "outed" years ago and that he would eventually settle down with a man was just a part of his DNA by now--something few longtime readers were really upset by.

Around the time of the official announcement, of course, the discussion drove itself to a fever pitch, with people from the left and the right demanding their say, jockeying for position around the third-tier Marvel hero like piglets suckling at a teat. People who don't read comics anymore, or comics readers who couldn't tell you lineup in Astonishing X-Men if you paid them to, all had an opinion because the issue itself was bigger than the...well, issue. Of the comic book.

And that carries through--in the course of the story there are guests who decline the invitation because they won't support gay marriage, there's an obligatory cameo by New York City Mayor Michael Bloomberg and a lot of acknowledgment that things are a little different this time out. At the same time, there's some typical wedding-day joking, too. The seating chart is a problem as a result of AvX, with Alpha Flight offering to work it out to avoid a battle at the reception. There's the old "My last wedding was attended as an assassin" joke and a handful of other one-offs that drive home for the reader that the Marvel Universe isn't exactly their own backyard, and that's fun.

Some of the X-Men also joke about how unlikely it is the wedding will even happen, given that superhero weddings always get crashed by a villain, which would almost be clever except that the only thing more common than supervillains crashing a superhero wedding, is the barrage of jokes about how that's always what happens. That said, when you're writing an issue for a mostly look-in audience of new readers who have never picked up your book before, it might be worth pretending at least some of those people are comic book neophytes who haven't heard that joke before, so it's alright.

The story picks up a week following Northstar's proposal last issue, and new readers aboard for the wedding discover that in fact Kyle turned him down and that the wedding only happened following a really remarkable series of events, all precipitated by an apparent heel-face turn by a former teammate of Northstar's. When the team is out of danger, they return to Westchester to postgame the day's events and Kyle accepts the proposal, setting the stage for the rest of the issue.

Generally I like Mike Perkins' artwork, but it doesn't really work for me here. As with many artists who have a more "photorealistic" style (most evident when looking at someone like Bloomberg), it tends to look a bit odd at times when he's working with characters designed to be depicted more iconically than realistically. It might seem like a wedding issue would sidestep that issue a bit, with characters being out of costume and the like, but there are quite a few places where the faces just don't seem right.

Marjorie Liu's script isn't perfect, either, but it's good. For every moment in the script that doesn't quite feel authentic (particularly the choice of the character who approaches Northstar to personally decline his wedding invitation), there's three more that work. While the decision to make Karma the story's villain will likely rankle some readers, it certainly imbues the story with a sense of importance it may not have had otherwise outside of the hype of the wedding. Liu also builds the story up as something with long-term importance by ending on a final-page teaser that only newbies could believe for even a second, but which will hopefully bring some of the look-in audience back next month to finish the story.

That said, the handful of characters who are speaking in hushed tones are at times a little hard to take. Maybe it would be different if I were opposed to gay marriage myself, but for most of the story I appreciate that the people expressing disdain or reservation for the practice are third-string characters I don't particularly care for. (It's the flipside of what they did with Northstar and Alan Scott: If you're going to make a controversial move with a character, let it be someone without many fans, who can only benefit from the support of those on that side of the controversy.) So Puck's comments, for instance, may seem odd but don't really damage the character in the longer-term for me. If anything, it gives him a touch of humanity and personality. Havok's reservations are a little more unsettling because not only does he have an established personality that I'm not certain this fits into, but as a character I actually like, I'd rather not consider the prospect that he's a bit of a homophobe. Therein probably lies the problem of writing a story like this; new readers joining the book for the first time will only ever know that character as "the guy who talked about what his grandmother would think at the wedding."

SpongeBob SquarePants: How Keanu Reeves Appeared in Sponge on the Run