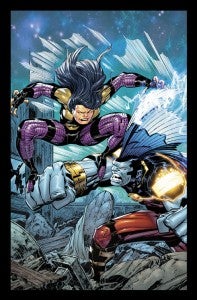 Over at DC's blog The Source, the second installment of their "3 Things You Didn't Know About..." series ran earlier today and shone a spotlight on O.M.A.C., the well-reviewed series by Dan DiDio and Keith Giffen which seems to be committed to bringing back as many of the big, sprawling sci-fi concepts to come out of Jack Kirby's mad genius brain as possible. Many observers have noted that Giffen is even aping Kirby's art style a bit in this book, and so it shouldn't be any surprise that one of the things teased by DC has to do with a Kirby concept.

What makes it somewhat more surprising is that the concept in question--Mother Box--is inextricably linked to The Fourth World, and that The New Gods have been somewhat off the table since they played a major role in (and were killed en masse during) Grant Morrison's Final Crisis event a few years ago. While Dan DiDio has famously established that none of the "Crisis" events have happened in the continuity of the New 52, there had been previous comments to the effect that Morrison had a greater plan for the New Gods, and that they would be unavailable to other writers until such time as the popular writer of Action Comics and Batman Inc. had an opportunity to finish that tale.

While the first arc of Geoff Johns and Jim Lee's Justice League features the team going up against Darkseid, that's a bit of a cheat since Justice League--like Morrison's Action Comics--happens in the past and so doesn't really affect any status quo that Morrison or DC might want to set for the characters in the here and now. O.M.A.C., however, takes place in the present day of the DC Universe and yet the plan, according to The Source, is to explore a relationship between the Brother Eye Satellite that controls O.M.A.C. and Mother Box.

Even the image provided by DC--apparently the cover to O.M.A.C. #6--depicts the title character fighting against a woman who looks as though she might be a version of Granny Goodness, rejuvenated by the relaunch of the DC Universe.

According to the rest of the blog post, there are things going on at Cadmus that even the agency's director, Maxwell Lord, doesn't know about. That may or may not apply directly to the third spoiler of the entry: that Simyan and the Evil Factory, old Kirby creations most affiliated with Mokkari, a character we've already seen in the first couple of issues of O.M.A.C., are alive and well in the New 52, "hidden away from all human eyes somewhere in Toledo."

I've been to Toledo. The best way to stay away from all human eyes is to go to a Mud Hens game. Even the players don't show up for those half the time.