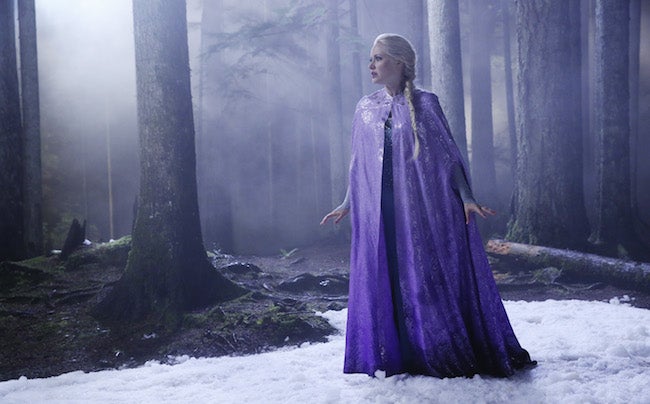 Once Upon A Time returns with the Snow Queen (Elizabeth Mitchell) resurrecting an icy monster.

Emma (Jennifer Morrison), Elsa (Georgina Haig), and Killian (Colin O’Donoghue), meanwhile in Storybrooke, are scanning city files for more info on the Snow Queen’s origins. Will (Michael Socha) is still behind bars, right in the same room. Elsa finds some old photos of Emma in Storybrooke, originally taken by Sidney (Giancarlo Esposito) when spying for Regina (Lana Parrilla), and in one of them, Emma appears to be arguing with the Snow Queen.

Having no memory of this, Emma and Elsa go to ask Regina for help. The ex-mayor is still searching for the Snow Queen, whom she believes might be able to unfreeze Marion. She sends Sidney to find her headquarters.

Emma learns upon visiting that Regina doesn’t know anything about the pictures and doesn’t have anything to say about Sidney’s whereabouts. Emma offers her help in unfreezing Marion, which Regina sharply declines. At the same time, a waiting Elsa in the car begins to hear Anna’s voice calling to her. She leaves the car and journeys into the fog to find her sister. When Emma returns, Elsa is gone.

Sidney returns shortly after to tell Regina that he’s found the Snow Queen’s lair and even tries to leverage his freedom from the mirror but quickly backs down. Regina follows his instructions into the woods where she runs into Emma, who’s been looking for Elsa since she left the car.

The two walk together towards the Snow Queen (where Elsa is likely to be), much to the annoyance of Regina. Emma keeps trying to make amends with compliments and small talk, but Regina is still furious with her for brining back Marion and “ruining her life.”

Elsa is shown running through the forest, following Anna’s voice. At one point she creates an ice bridge (reminiscent of the Let It Go video) to run to Anna, who falls when Elsa gets to the end of the bridge.

Back to Elsa, who’s running through the forest towards a visage of Anna. She even creates an icy bridge reminiscent of the “Let It Go” scene in Frozen, but when she crosses, the image of Anna falls. Eventually, she finds Anna and hugs her, but finds her oddly stiff and aloof. The Snow Queen appears, explaining that Anna was just a vision. 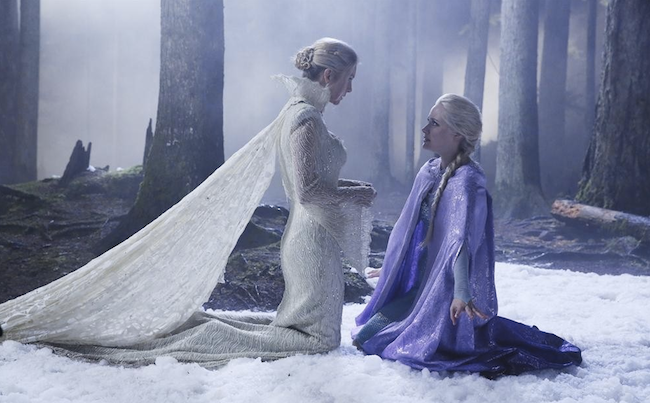 Next, the Snow Queen chains Elsa to the ground with ice, explaining that she needs Elsa out of the way. Since Elsa cannot control her fear and in turn her powers, she will be unable to thaw her chains. It’s her fear that keeps her bound. Elsa asks the Snow Queen what she’s going to do as she walks away, to which she replies “build a snowman.”

Emma and Regina cross Elsa’s recently built bridge on their way to the Snow Queen, when a sharp gale of wind threatens to knock them off. Regina realizes that Sidney, who’s now working for the Snow Queen, has led them right into a trap. The two sprint across the bridge as it starts to collapse, jumping just in time to find themselves face to face with the enormous, axe-wielding monster that was brought to life at the episode’s opening.

Regina and Emma’s powers are enough to hold back the monster initially, but only when they combine their magic are they strong enough to defeat it. The Snow Queen immediately appears, stealing Regina’s mirror and choking the women, before Elsa – who has managed to control her emotions and free herself from the ice chains – appears to save them.

In town, David (Josh Dallas) convinces Mary Margaret (Ginnifer Goodwin) that it’s okay for them to leave baby Neal with babysitter Belle, so that they can go on a hike date. They go to pick up a walkie-talkie from the station and realize that Will escaped. Their date takes an adventurous turn as they leave to go hunt him down, just like old times. The couple wonders around in search for about an hour, before Mary Margaret admits to being too nervous about Neal to continue. As soon as David advises her to go home as he goes off to search, she finds Will feverishly digging.

She approaches him and learns that he’s digging for his bag, which he buried when drunk. After a brief, fruitless conversation, Mary Margaret concludes that this must all be a hoax set up by David, designed for her to catch Will and feel good about herself. He “admits” to the trick, and she pardons him.

When David gets home later that night, he tells her that he had nothing to do with it. She did indeed pardon a wanted criminal for no good reason, but he’s okay with that. All the guy ever did was pass out in a library and ruin Emma’s date, after all, and it made Mary Margaret feel like herself again.

In a Minnesota flashback we find Emma (Abby Ross) in her teens, trying to shoplift some food. A girl around her age helps her out, even offering that Emma join her at the mall afterwards to steal some clothes with a stolen credit card. Emma and the other girl, Lily (Nicole Muñoz), become close friends quickly, and Lily even invites Emma to stay with her at a currently unoccupied summerhouse. Emma shares her orphanage story with Lily, who claims that her story is the same. She has a peculiar birthmark, which she draws a duplicate of on Emma. The two promise to be friends forever, “no matter what.” 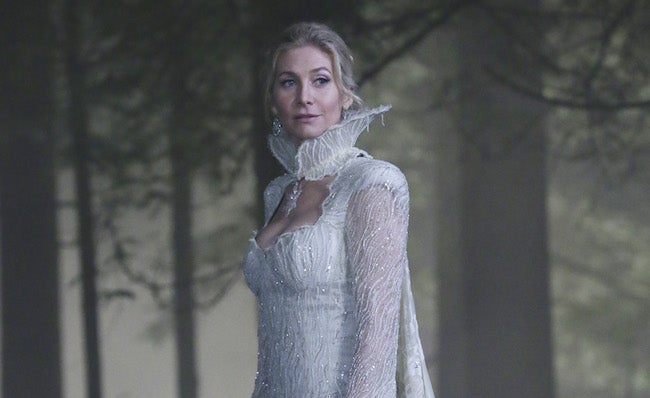 The two eat junk food, play video games, and mess around with a video recorder in the summerhouse. Eventually, a man breaks into the home in search of Lily. He turns out to be her father, as she was truthfully only a runaway. The credit card she had been using as his as well. Emma’s heart breaks, because she finally thought she’d found someone like her. Lily tries to give her contact information for once the whole thing blows over, but Emma refuses it.

Back in the present, Sidney asks the Snow Queen what she wants of him next, in her frozen fortress. She says that she never wanted anything from him; she only wanted access to the dark magic contained in the mirror she took from Regina. She frees Sidney, advising him that he should get a warm coat, because “it’s going to get a bit cooler around here.”

He leaves, and she breaks the small mirror. She conjures a much larger, broken mirror. Using a shard of glass from Regina’s mirror, she repairs the much larger one. Looking into the mirror she exclaims that she can now finally get what she wants: a family who loves her.

Emma goes to Regina’s home at the advice of Elsa, who says that she shouldn’t give up on anyone important to her. Emma thinks back on her time with Lily and realizes that she should have forgiven her. She doesn’t want to make the same mistakes with Regina, who like Lily, Emma has a lot in common with. Regina is the only other magical woman in town who understands Emma’s rejection and isolation. Regina seems to soften as these words, jokingly admitting that she never really wanted to kill Emma.

The episode ends when Killian pays Emma a visit. She’s been going through a box of her old childhood things, which she shares with him. The video camera that she and Lily once used to make funny faces is in the box, so she plays the video for Killian. Their brief video ends, airing whatever is recorded next on the tape.

Emma speculates that the video must be from her next foster home, but she doesn't remember any of it. A boy is seen pointing the camera at himself, with young Emma in the background asking for it back. Her assumed next foster mother – the Snow Queen – steps in to take the camera back from him.

Once Upon A Time Season 4 Episode 5 Recap With Spoilers: Breaking Glass