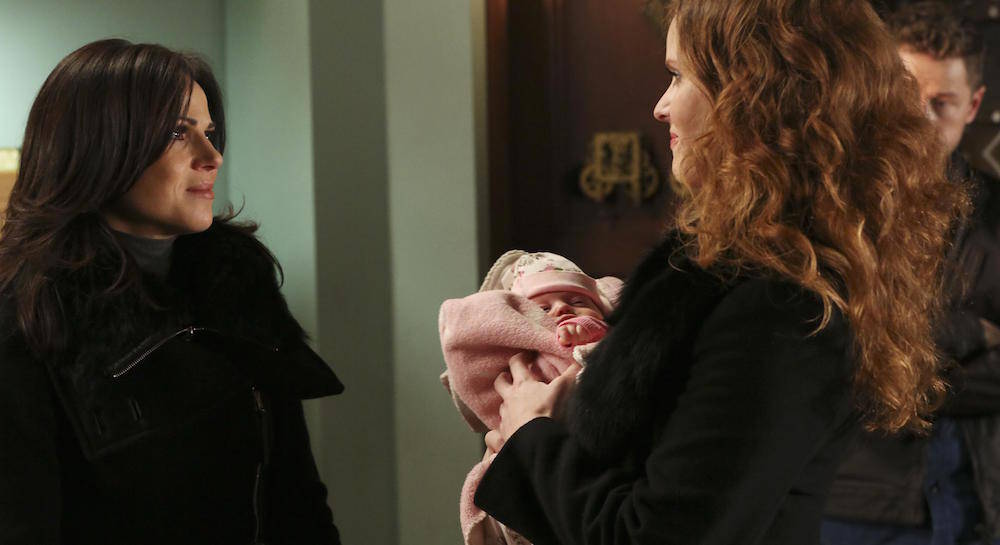 The episode resumes shortly after Regina (Lana Parrilla) encouraged Zelena to pursue a relationship with Hades – which Hook (Colin O'Donoghue) and the others consider an enormous mistake. Before they can argue much, Hades (Greg Germann) appears. He was supposed to meet Zelena for a date, only to find her kidnapped by Rumplestiltskin and Peter Pan, who are willing to trade her if only Hades will rip up the contract for Rumple's unborn child. Hades offers Emma (Jennifer Morrison) a deal: If she will help him get back Zelena, he will erase the names of her friends and family from their gravestones, allowing them to leave the Underworld.

Hades meets with Rumple (Robert Carlyle), Pan (Robbie Kay), and Zelena (Rebecca Mader) at a designated time at the diner, immediately ripping up the contract as requested, satisfying Rumple. However – Pan wants Zelena's heart as well, so he can return to the living realm. They are stopped by Emma, who breaks in through the back door, and they both poof away. When Hades and Zelena share a kiss, his heart begins to beat once again, ending his banishment and allowing him to finally leave the Underworld if he wants. Hades agrees to open a portal to Storybrooke, which will close at sunset, so that they can all leave.

At the graveyard, Hades wipes the gravestones clean. Emma attempts to split her heart into two pieces, sharing it with Hook so that he can return with them, but the process doesn't work. Hades explains that his soul simply cannot return to a decaying body in the living realm; he has been in the Underworld for too long. Although – he does know a rumor of the one single time when someone was able to bring the dead back to life from the Underworld: the story of Orpheus and Eurydice.

Based on the tale, they will need to feed Hook ambrosia, the food of the Gods. Unfortunately, the only way to get ambrosia is to go deep into the Underworld, where there is a test to determine who is "worthy" of the ambrosia – based on the person's heart. Hades rips out Emma's so that she can bring it with her, before she and Hook descend. The others promise her that they will leave by sunset, just in case she doesn't come back. Elsewhere, Pan demands that Rumple help him get a heart before he leaves, offering Pandora's Box in return – which will keep Belle safe.

While the others wait for Emma and Hook – Henry (Jared Gilmore) and Regina decide that some of them should stay behind, to help those with unfinished business. Regina even convinces Robin (Sean Maguire) to give his baby over to Zelena, so that she and Hades can leave and keep the baby safe. Robin agrees, but then, he steps aside for a breath of fresh air and runs right into Rumple, who steals his heart.

Nearby, Henry helps people figure out their "unfinished business," using his powers as the Author. They are now able to leave successfully without Hades keeping them in. But then, the group of heroes is stopped by Cruella (Victoria Smurfit) and the Blind Witch (Emma Caulfield), who plan to run the Underworld in Hades's absence. They lock up Regina, Henry, and the others, planning to keep them away from the portal. Regina believes that Hades had to have helped the Blind Witch, who isn't normally capable of such powerful magic.

On the quest for ambrosia, Emma has to physically weigh her heart to see if she is worthy. She puts her heart on some sort of scale but suddenly finds herself doubling over in pain. Hook tries to grab her heart back but he is lit on fire. Emma must choose between grabbing her heart or saving Hook, and when she chooses the latter, she is deemed worthy of the ambrosia, opening a door. But, when they walk through, the find that the ambrosia plants are dead. Hades must not have wanted them to return to Storybrooke.

At the graveyard, Hades convinces Zelena to go through the portal, even though she wants to wait for Regina and the others. 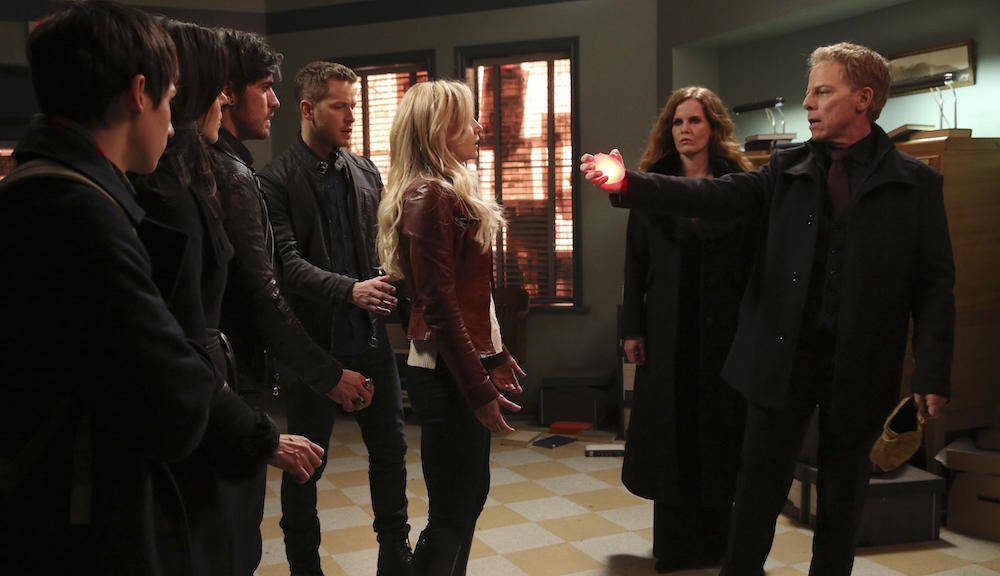 In a flashback to 2009, we find an adult Emma trying to find out the truth about her family. She's quickly found by some sort of mysterious bounty hunter, Cleo (Rya Kihlstedt), who has been following her ever since Emma robbed a few convenience stores. The two adversaries begin to bond, and Cleo even agrees to grant Emma some access to records that may help her find her family, though the information falls short.

They head onward to Phoenix, where Emma is wanted, though Emma continues to try and escape in the night. Cleo lectures Emma, saying that her parents wouldn't want her to dwell. Both nearly arrested when Emma breaks into a government record office, but Cleo kicks through a window and they escape. They haven't run for long when Cleo gives up, after being cut badly by the broken glass. Emma tries to help her, saying that she will find her family, but Cleo tells her that she doesn't have a family – having given her daughter up long ago. Emma leaves, outrunning the police.

Some amount of time later, Emma finds Cleo's daughter, who is now a young woman. Emma collected a bunch of information about Cleo so that the girl could know more about her mother, now that she has passed. She is sad but appreciative. On the way out of the store where Cleo's daughter works, Emma buys her signature red leather jacket – inspired by a similar jacket worn by Cleo.

Back to the present in the Underworld, Rumple brings Pan the heart, just as the portal is starting to close. Far below, the rumbling of the closing portal begins to make the ceiling fall above them. Hook wants Emma to go on without her. He doesn't believe that they're ever going to find a way to restore him to the living realm and decides that it's officially time to say goodbye. During a tearful exit, he agrees not to let her be his unfinished business, and she agrees not put her emotional armor back up once they are separated.

Emma makes it back to ground level, where her family is also trapped, thanks to Hades and the Blind Witch. They realize that they have all been set-up by Hades, though the combined magic of both Emma and Regina is enough to break them free, to pursue the portal. Henry leaves a storybook behind with the details on the "unfinished business" of all the remaining Underworld residents.

Nearby, Rumple pushes what seems to be a heart into Pan, but it turns out to simply be a glamoured bag of water from the River of Souls, destroying Pan forever. Rumple returned the heart to Robin previously, when neither Pan nor his shadow was looking. Rumple uses Pandora's Box to safely contain Belle and heads to the portal, stepping through. Emma and the others get there just in time, though Emma is reluctant to leave the realm where Hook resides.

The portal closes – with Emma, Henry, David, Regina, Robin, Rumple, Belle, Hades, and Zelena presumably all successfully back in the living realm.

Once Upon a Time Season 5 Episode 20 Recap With Spoilers: Firebird