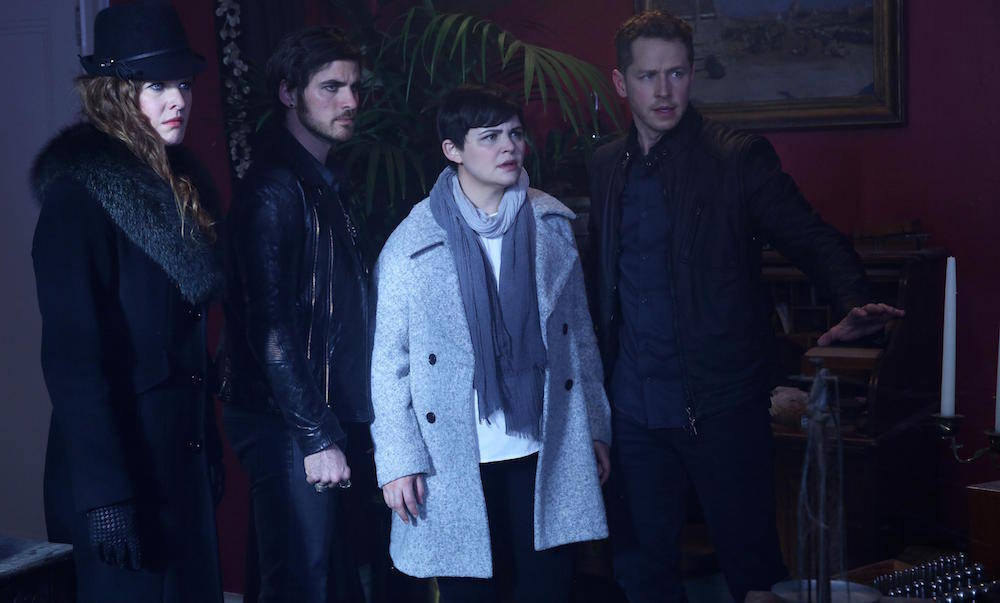 The first episode of the season finale opens on a grieving Regina (Lana Parrilla) at a memorial service for Robin. Zelena (Rebecca Mader), having just lost Hades, mourns as well. Also at the service, Henry (Jared Gilmore) reunites with Violet. Emma (Jennifer Morrison) wonders if it's appropriate for Hook (Colin O'Donoghue) to go to Robin's service at all, thinking that Regina and Zelena might find it unfair that he was allowed to come back from the dead.

Nearby, in the clock tower, Rumplestiltskin (Robert Carlyle) uses a spell to tether the Olympian crystal to Storybrooke's magic, and the whoosh of power shakes all of Storybrooke. Emma, Regina, and Zelena go right to the source only to find that Rumple is gone. They assume that he was only using the crystal to free Belle, but they are worried that he could do more damage with it afterwards. Emma thinks that Regina should sit their next journey out, so Regina angrily leaves in a huff, saying she will "fix this" on her own.

Henry then determines that nothing good can come from magic – whether it's light or dark. He explains his new philosophy to Violet, and she agrees to go on a roadtrip, which Henry names "Operation Mixtape." Henry picks up the Author's pen, writes that the Author becomes in possession of the Olympian crystal, and suddenly, it appears in his hand. He sends both of his mothers a text, detailing his plans.

Rumple joins the group of heroes to tell them that Henry has indeed taken the crystal away, and he explains that, if Henry destroys all magic, it might destroy Storybrooke. Conveniently, Emma put a GPS app on Henry's phone, making it easy for them to track him, but he outsmarts them and hides his phone on a bus. Zelena then summons a portal, so that all of the guests of Storybrooke, such as Merida, can go back to their homes, just in case magic does get destroyed. However, she struggles to close it, and the portal pulls Zelena, Snow, David, and Hook through before sealing.

The group finds themselves suck in some mysterious, unknown realm, with Zelena's wand broken. They find a frightened gardener, who says that they shouldn't be there. Suddenly another man appears, using magic to knock over the whole group. This time, they wake up in a cage of enchanted bars. They are greeted by the warden, who is convinced that the Dark One must have sent them.

Then they are visited by the gardener, who agrees to help them if they take him to Storybrooke. Zelena gives him her broken wand, hoping that he will repair it for them. The man who knocked the group over earlier, Poole (Arnold Pinnock), finds the gardener, takes the wand, and pours some sort of potion down his throat. The gardener suddenly turns into the warden himself. It becomes clear that the gardener, or "the doctor," is Dr. Jekyll (Hank Harris), while his transformed self, or the warden, is Mr. Hyde (Sam Witwer). 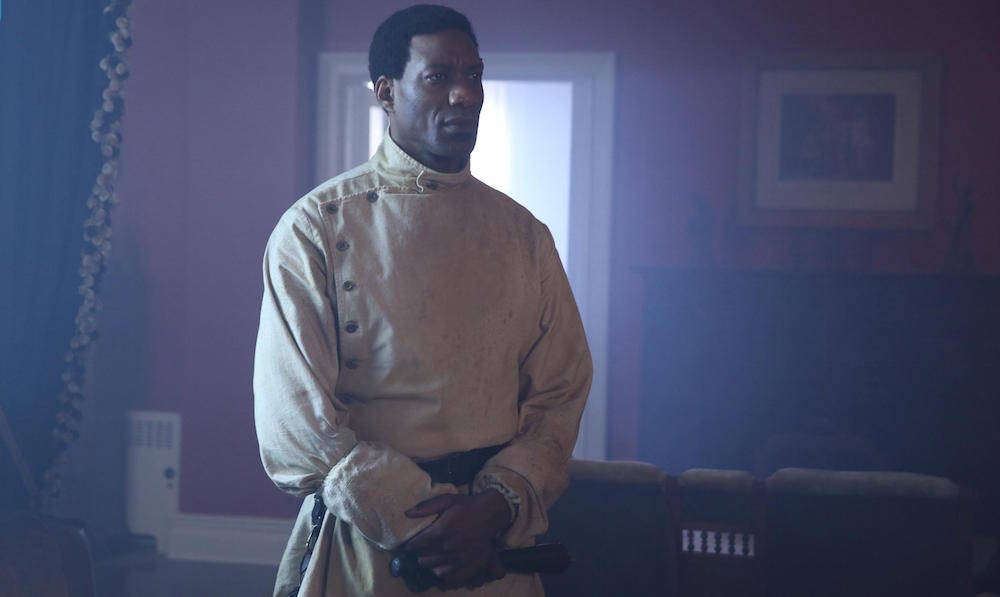 We next see Henry and Violet in New York City, and Emma and Regina discover that their magic works out in the real world. Using a drop of Emma's blood, Regina uses her magic to figure out Henrys' new location, essentially racing Rumple to the big city. Henry admits that his father was trying to destroy magic before he died, so they make plans to find his journal. While on Henry's trail, Regina finds an old letter from Robin addressed to her, reminding her that she will always be the brave heroine with whom he fell in love.

Regina admits that she will never be at peace with herself, always wondering if she should just be the Evil Queen. She feels that she is cursed, knowing that she will never find redemption. The more good that she does, the more people she loses. And before Emma can convince her otherwise, it seems that Regina may adopt darkness again.

Henry and Violet look for more answers in the library, where he finds multiple Storybooks that look just like his, with different stories inside. Then, Violet sees what appears to be the twin of the Holy Grail, which was said to hold all magic. He steals the "Holy Grail," stashes it in his bag, and runs right into Rumple, who puts them both to sleep and takes back the crystal.

Emma and Regina find Henry and Violet, but Henry doesn't tell them about their findings with the Holy Grail. They realize that their magic is ineffective again, certainly based on something that Rumple has done. Meanwhile in the other realm, Mr. Hyde summons a portal. Rumple is just about to free Belle from Pandora's Box, when Mr. Hyde pulls it through the portal he has made. If Rumple ever wants to see his wife again, he will have to cooperate with Mr. Hyde.

The second part of the finale opens with in Dr. Jekyll's realm. He tells the prisoners that "the warden" stole Zelena's wand, but he is able to free them. They find themselves in the "land of untold stories," filled with escapees from all sorts of worlds who have sought refuge. Dr. Jekyll has just finished a serum that will separate the evil from the good in a person, but Poole enters and forces him to transform into Mr. Hyde once again.

After they run away, Mr. Hyde injects himself with the serum, and Dr. Jekyll and Mr. Hyde are finally split into two separate entities. Hyde tries to kill Jekyll instantly but is saved by Hook and the others. 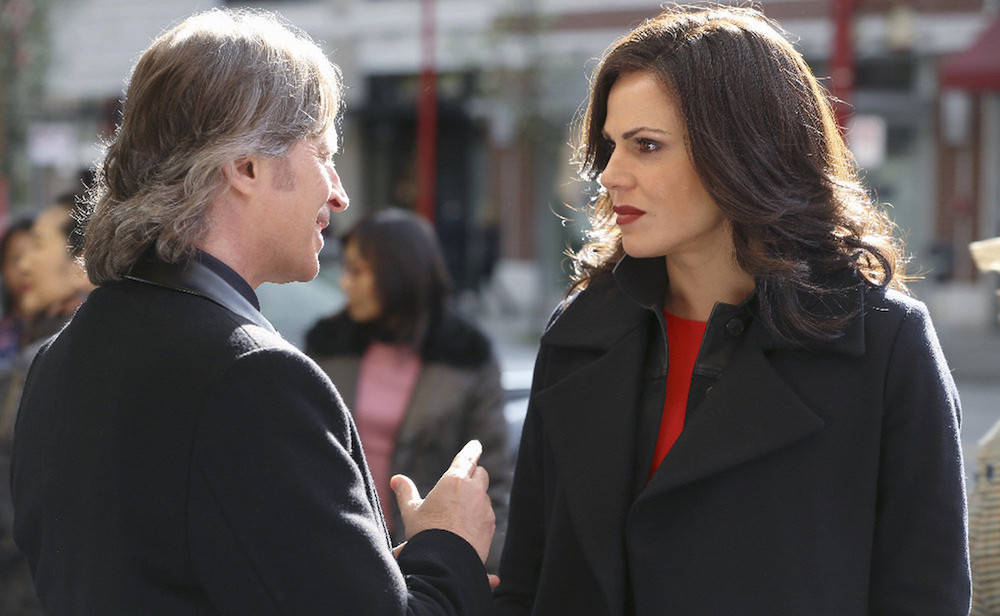 In New York City, Rumple swipes a sterling silver tray from a concierge and gives him $100 to be left alone. Then, Emma learns via text that Zelena, Hook, and the others have disappeared. More motivated than ever, Regina goes right to Rumple's hotel room and tells him that she may be turning to darkness again. Emma tries to snag the Olympian crystal while Rumple is distracted, but he catches her – having known their plan all along. Rumple is about to vanquish them both, when Henry enters with the Holy Grail and finally destroys all magic.

Of course, Henry has no idea that he may have just trapped Belle, Hook, Zelena, and the others in another realm forever. Rumple admits that Storybrooke hasn't been destroyed – which was a lie he made up earlier - and that there is one more person with magic in New York City. He introduces them to The Dragon (Tzi Ma), who is willing to help. The Dragon attempts to open a portal to the realm with the others, but he fails. He insists that there is still magic everywhere, "if you are willing to see it."

Henry takes them to a typical fountain, the kind that people toss coins into when they're making wishes. He wishes that they would be reunited with their family and tosses a coin, convincing the others to do the same. The Olympian crystal begins to pulse, so Henry climbs a statue and tries to convince the citizens of New York to help them return magic to the world.

In the other realm again, the group keeps finding themselves at dead ends, ultimately running into Hyde. Suddenly, the coins of the New Yorkers that Henry has inspired begin to reign down upon them, opening a portal. Hook and the others hop in and then find themselves in New York City, right in front of the fountain. Afterwards, Regina separates from the group, needing some time to think. Snow tries to console her, but Regina is convinced that there's nothing she can do to get rid of the Evil Queen inside of her.

Fortunately, Jekyll has another dose of the serum that separates the evil inside someone, allowing Regina the chance to push the Evil Queen out and kill her, personally. She injects the serum into her arm, and Emma and Snow stand by, ready to help. Regina and the Evil Queen split into two entities, and Regina finally destroys her darkness.

One more time in the other realm, Hyde returns to his laboratory to throw a temper tantrum, where he finds Rumple, who went right through the portal. Rumple at first threatens Hyde with death but lets him live, once Hyde reveals that he knows how to wake Belle. Rumplestiltskin and Mr. Hyde discuss a deal.

Then, back in Storybrooke, Violet reveals that her father was originally from Connecticut and returns to her father. Now that they're all back home, Emma tells Hook that she loves home. Next, Regina uses her magic to untether all of Storybrooke's magic from the Olympian crystal, restoring everything to normal.

But then, Hyde rounds the corner, clearly having made a deal with Rumple. Not only is he in Storybrooke, but also, he owns it. Lastly, the spectral presence of the Evil Queen appears in The Dragon's shop. She rips out his heart and declares a new war. The Queen is back.

Once Upon a Time Season 5 Finale Recap With Spoilers: Only You & An Untold Story