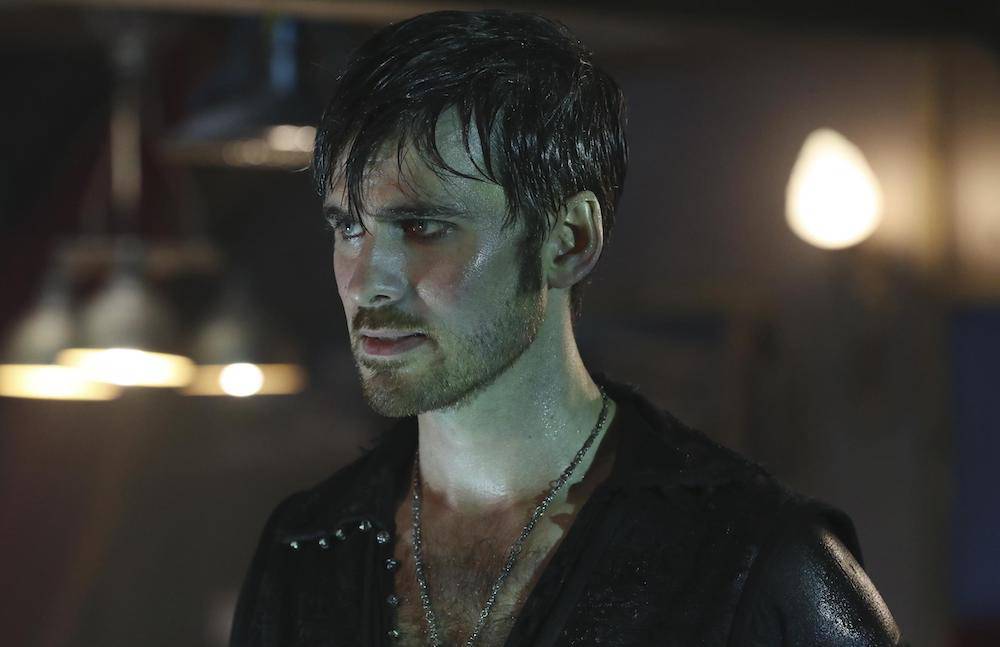 "Dark Waters" opens during the Time of the Dark Curse, with Hook (Colin O'Donoghue) yelling at his crew on the Jolly Roger. An unknown man who snuck onto the ship is the only one to stand up to him. Before Hook can cut him down, what looks like a glowing sea monster appears in the water. The mysterious man pushes Hook into the ocean, jumping in after him.

In present day Storybrooke, Regina (Lana Parrilla) stands outside of Zelena's house, calling out the Evil Queen. She leaves the house, Zelena (Rebecca Mader) in tow, and while Regina distracts them, Snow (Ginnifer Goodwin) and David (Josh Dallas) manage to free Archie, who was turned into a cricket. Zelena and the Evil Queen go back inside when they hear Zelena's daughter crying, but Regina, Snow, and David escape.

We then see Aladdin (Deniz Akdeniz) and Jasmine (Karen David) hanging out at Granny's, where she is begging him to save Agrabah, even though he is no longer a Savior. When he runs away, she calls Emma (Jennifer Morrison) for help. With Emma looking for Aladdin, Henry (Jared Gilmore) is stuck at home with Hook, who tosses out his Pop Tarts to make him something pirate-approved.

Henry goes outside to take out the trash, and the Evil Queen appears. She reveals that Hook has kept the Fates' Shears, which he told Emma he had buried in the ocean. When Hook leaves the house later, looking for Henry, he realizes what the boy has learned.

Then, the flashback continues. A waterlogged Hook wakes up in some sort of submarine, the Nautilus, and the man that pushed him in the water reveals himself to be Nemo (Faran Tahir). He explains that, like Hook, his family was taken from him. Nemo demands Hook's help on a mission.

Nemo, Hook, and Nemo's first mate eventually find a hidden treasure chest. On the way, the first mate explains that his family was also taken from him, just like Hook's and Nemo's. Hook tries to run away from them both, but he is attacked by a Kraken. Nemo and his first mate save Hook, calling him part of their "family."

Again in Storybrooke, Hook heads to the docks, where Henry is preparing to get rid of the Shears, but they are thwarted by Nemo's men, who take them aboard the Nautilus. It's clear that Henry and Hook don't have much in common, and Henry is furious at Hook for keeping the Shears against Emma's will.

Suddenly, we see Snow and David at the hospital, where one of the unknown new citizens from the Land of Untold Stories has been seriously injured. Snow catches Belle (Emilie de Ravin) in the waiting room, where she's bracing herself for her first ultrasound, alone.

Meanwhile, Rumplestiltskin (Robert Carlyle) pays a visit to the Evil Queen, already aware that Henry has taken the Shears (which Rumple calls the "Shears of Destiny") and assuming that the Evil Queen was involved. There may be some way he can use the Shears to get to Belle, but the Evil Queen says they are long gone. 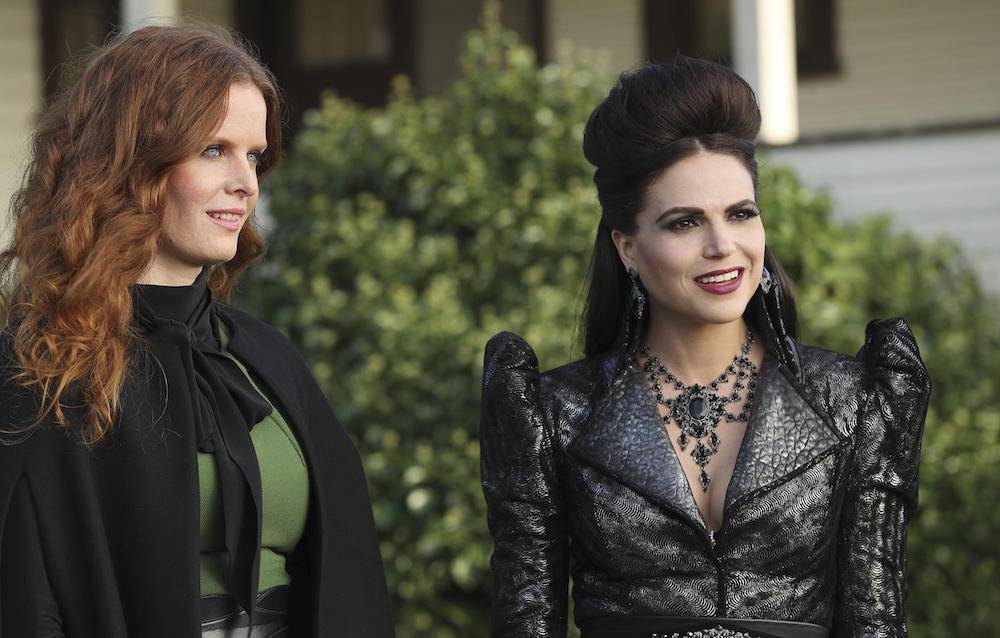 The episode cuts back to Emma, who has found Aladdin and taken him all the way to the "Welcome to Storybrooke" sign. She admits to him that she has run from her duty as the Savior many times. Their conversation inspires Aladdin to learn more about what is happening in Agrabah.

Back in the Nautilus, Hook opens up to Henry. It isn't news to Henry that Hook killed his father, after he abandoned Hook and his brother Liam, but Hook explains that his father also had a new son. His father had named the new boy "Liam," which was too much for Hook to handle.

The flashback continues again, with Nemo opening the treasure chest. He reveals a key to the gateway of the "Mysterious Island," where they can each start a new life, devoid of loss. During their conversation, Hook recognizes a blade on Nemo's desk, causing him to inquire about the first mate's name – which is Liam.

In the Nautilus back in the present day, it appears that Hook and Henry may be able to escape, but there is only one suit with which to do so. Hook insists that Henry use it to get back to his mother, and, after pushing the boy out, Hook finds his half-brother Liam, who has been waiting for him, blade in hand.

The episode flashes back again, with Hook deciding to leave the Nautilus after learning about Liam's identity. Liam appears before Hook can get off the ship, and despite Nemo's wishes, Liam tries to stab Hook. Nemo jumps to Hook's defense, getting in the way of the blade and taking a deep stab to the gut. Hook is finally able to escape.

Once again in the present, Liam explains that Hyde took Nemo shortly after that moment, and Hook realizes that the Mysterious Island is the same place as the Land of Untold Stories. Just in time – Henry appears to distract Liam, and Hook knocks Liam out with a solid punch. Henry knew he had to come back to save "his family." Then, they put the Shears in a chest and drop it deep in the ocean.

Later, Aladdin returns to Jasmine and apologizes for leaving, but while he was gone, Jasmine learned that something has happened to Agrabah – causing it to disappear entirely.

At the hospital, Snow is still waiting on the patient from the Land of Untold Stores, and Belle's ultrasound has gone well. We then see Liam in a hospital bed with Hook by his side, and the unknown patient is revealed to be Nemo, who is going to survive. Hooks tells Emma that he lied and kept the shears, but they are now – for sure – at the bottom of the ocean. She forgives him, saying she would have done the same.

Lastly, the Evil Queen goes to Rumple's shop to "make amends." She says that the most important thing he ever taught her was to "go after what you want," as she moves closer and closer to him. They make out briefly, during which time, Belle walks by and slips an ultrasound picture under Rumple's door.

Then, the Evil Queen reveals that she now has possession of the Shears of Destiny and says that the true object of her desire is Snow White's heart.

Once Upon a Time Season 6 Episode 6 Recap With Spoilers: Dark Waters