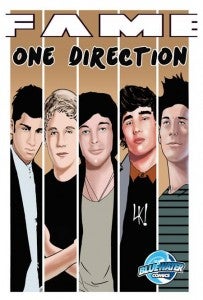 One of the criticisms often leveled at Bluewater's biographical comic book series, including the Fame series and the Political Power series, is that they're often too ambitious for their own good. Looking at the lives and works of famous and successful people is often difficult in the rather short form of a floppy comic magazine. Well, coming soon, fans of the hot new band One Direction will be able to read Fame: One Direction, a new short graphic novel from Bluewater that's extremely unlikely to have any such challenges leveled at it. While there might be five lives to look at, it's really just the last eighteen months that are of interest to the writers of the new biography of Harry Styles, Niall Horan, Liam Payne, Louis Tomlinson and Zayn Malik, Simon Cowell's X Factor darlings. Writer Michael Troy and artist Gustavo Rubio are taking on the project for Bluewater. Katy Perry, Demi Lavato, Lady GaGa, 50 Cent, Justin Bieber and others have been immortalized in the Fame series in the past. Bluewater have a presence in the bookstore market and tend to do well outside of the comics direct market, where most comic magazines make most of their money. Recently, the publisher actually divorced itself from Diamond Comics Distributors. No solid release date is yet available for the Fame: One Direction series, but expect it around the time the band's album drops in November.

One Direction to Get a New Bio-Comic