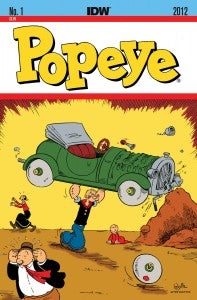 Eisner and Harvey Award nominee Roger Langridge, who works on IDW's Popeye and Snarked! for Boom! Studios, announced in an interview with the Orbital Comics podcast that he's decided to no longer work for Marvel and DC Comics over ethical concerns stemming from creators' rights issues, according to an article at Bleeding Cool. They quote him as calling DC and Marvel "quite difficult from an ethical view to continue working with."

"I was writing the last issue of John Carter when the news came that Marvel had won a lawsuit against the heirs of Jack Kirby and Steve Bissette wrote an very impassioned post about the ethics of working for Marvel under those circumstances," Langridge told the podcast. "Pretty much then, I figured I should finish the script I was writing and move on."

He added, "It’s not like Marvel need me. It’s no skin off their nose if I don’t accept anything from them in the future."

ComicBook.com speculated last month that we might see more of this sort of thing, after iZombie co-creator and former Superman writer Chris Roberson publicly announced that he was done working for DC Comics following an arc of Fairest for which he was contracted. The next day, DC fired Roberson from the Fairest arc, releasing him from his contract after the final issues of iZombie are published. He said that he was leaving largely over the ethical issues raised by Before Watchmen, something that he had discussed with ComicBook.com months before.

Both Roberson and Langridge currently work for IDW, with Langridge telling Bleeding Cool that his four-issue Popeye miniseries has been expanded to an ongoing after it sold out this week and that he will have a second series from the publisher announced soon.

No word on whether this will prevent future Popeye issues from having DC parody covers.