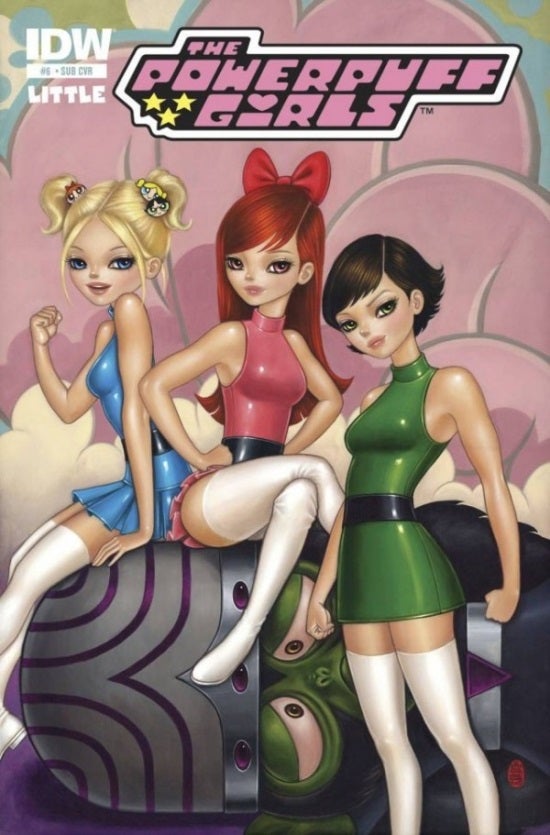 is reporting that Cartoon Network has pulled the controversial, subscription-only variant cover to the sixth issue of IDW Publishing’s The Powerpuff Girls comic book series.

The cover, by artist Mimi Yoon, depicted the Powerpuff Girls as anime-style teenage girls dressed in skintight uniforms with short miniskirts. The cover has been accused of overly sexualizing the children’s characters, particular after comic book retailer Dennis Barger Jr. voiced complaints on Facebook, posting an image of the cover with the comment "Are we seriously sexualizing pre-teen girls like perverted writing fan fiction writers on the internet???? is that what this s*** has gotten to? DISGUSTED."

"That was actually a Cartoon Network mandated cover, by an artist of their choosing.  I think they were thinking of it more along the lines of "female empowerment" than the kind of thing you guys are talking about, but certainly, we're sensitive to the issues here.  We love making comics for kids, and always want them to be appropriate.  For what it's worth, CN has been a great partner in that regard... I know an 8 year old and 10 year old really well, and always look at these kinds of things through their eyes... Half of the employees have kids here, and we pride ourselves in making comics they'll enjoy and not give them a warped view of the world (except, you know, in a good way).  Anyway, I certainly see your points, and we'll be sensitive to these things, as I think we mostly have been."

Cartoon Network Enterprises said that the cover was intended specifically for “comic book fans,” suggested that the Yoon’s style was not intended to appeal to children in the first place.

The Powerpuff Girls #6, minus one variant cover, will be released in February 2014.