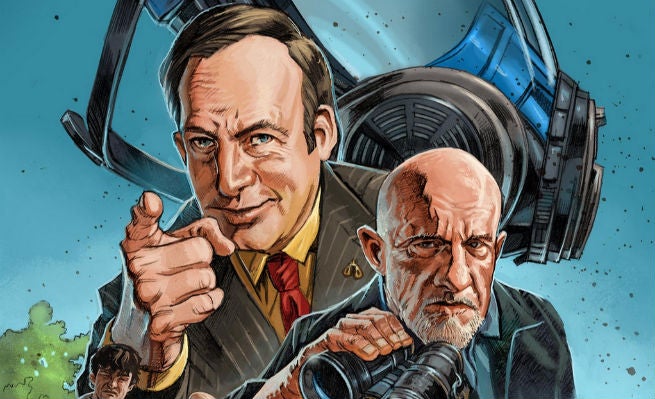 Veteran comic book artist Steve Ellis, currently working on The Only Living Boy with writer and co-creator David Gallaher, has returned to the world of Breaking Bad -- a place he's been before -- for the new Better Call Saul webcomic.

You can see more details on the comic here.

Before that, he joined us to talk about Better Call Saul and his ongoing relationship with AMC. 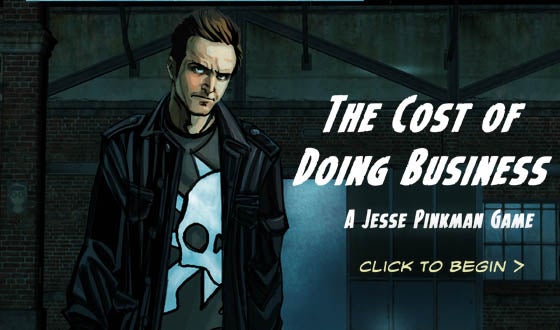 How did you come to be involved with the Better Call Saul comic?

I've been working with AMC for a few years now. They first got in touch with me after discovering my online comic "High Moon," about doing a comic-style game for Breaking Bad called "the Interrogation." In truth this was my first introduction to the show. Later, we did the comic-style game The Walking Dead: Dead Reckoning which we followed up with a really complex game for Breaking Bad featuring Jesse Pinkman called "The Cost of Doing Business." At some point, they decided to try doing an online comics reader which we designed together and we created the comic "Breaking Bad; Bad " and one for Turn as well.The Better Call Saul was kind of a perfect continuation.

Whereas when they did a Breaking Bad comic, the show was already a bona
fide hit, this time around it's a prequel comic that you were presumably
working on months before the show ever aired. Was that different, from a
point of view of not necessarily having every element of the world to look
at onscreen?

Yes, luckily, our story centers on story points that Breaking Bad fans will recognize albeit now from the point of view of Saul and Mike. We had to redesign scenes from the show from different angles and create completely new set pieces to fill in gaps in what you saw onscreen. I didn't really have any crutches like shots from the TV to rely on. Luckily, I really enjoy the struggle of finding new interesting angles and even had there been perfect reference I would have wanted to change up the angles and such... Stupid creative integrity, I don't want to simply reproduce screenshots.

In these kinds or projects, likeness is obviously a huge issue. How much
more time do you end up spending on making sure to get that aspect of the
art just right?

Actually a lot, and I still feel like there's a lot of room to improve. I've tried to find a balance between a character and a likeness by really interpreting the characters through my filter. That way, I feel comfortable doing different things with the characters. The hardest part with this is that Saul is such an expressive character, trying to mimic hand gestures and facial expressions with new text was a real challenge.

Would you have rather had something that led right into the pilot, or was
it fun to get to draw the Breaking Bad characters in this?

Oh I think it was great to revisit the original scene through Saul's eyes. For me, as a fan, I love having the opportunity to add something to the continuity of an already established show( especially when I get to play with one of the most popular shows of the last few years. ) In the Dead Reckoning Walking Dead game we got the create the first day of the zombie apocalypse from the point of view of Shane. It's now considered canon....That's just pretty cool.

What kind of freedom did you have in terms of the layouts and breakdowns?
Was the project full script or more Marvel Style?

They were very open to my storytelling. The script was pretty much a mix of the marvel and DC styles of scripts. We tend to talk out the scripts and layouts ahead of me drawing them. It gives us all a chance to be on the same page. There are times when I have to give some things up, but usually what we find is we can tell more with the visuals and lessen the amount of dialogue. It's actually a very creatively fulfilling process. One scene in particular, we went back and forth with different designs to make certain the storytelling told the story with the subtlety we needed, not revealing too much too early, but giving just enough information to move the scene along at an even pace.

Superhero Saul was kind of a trip. Was it you or somebody else who pitched
the ben-day dots and sepia colors?

The Superhero Saul was a blast! I would love to do more with that. They had asked me to make it look like an old comic, so I threw down a scan of an old comic I had to get the right texture and then I made the ben-day dot screen on the colors. We all really liked the final effect.

Are there any more of these planned down the road?

I can only hope so. It was such a great experience I hope to do more.