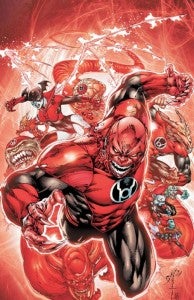 Long before the actual DC relaunch began, it was pretty interesting to see which characters and teams would receive books of their own and which would not. Some surprises may have been Mr. Terrific, Batwing or even Batgirl, I was struck by an entire book on the Red Lanterns. In this comic book era there are certainly no shortage of lanterns of various hues and colors, but the reds were an interesting choice if not an obvious one. If you're looking for action and thrills, the red lanterns are going to deliver. I'd be hard pressed to see how long a book based on the blue lanterns might last, but hey, I could be wrong. The lanterns of rage, the Red Lantern Corps comes screaming out of the gate in issue one, with the color of their uniforms not the only red seen flowing on the first few pages. How does this first issue of Red Lanterns fare overall? Overall for a book about rage, it left me wanting to read more to get inspired, yet I felt cold to the character at the same time.

The focus of the issue, rightly, is chief red lantern Atrocitus, and a large focus of the book is his inner dialogue about his, for lack of a better term, personal demons surrounding the issue of his rage and whether or not he feels it as fully as he used to. Perhaps more importantly, are his fellow red lanterns seeking a shift in his feelings and as a result feeling less inclined to follow him? Is he just going through the motions of goring and killing people with his power and rage? We learn about Atrocitus' anger at not being the one to kill the Guardian responsible for his sector's destruction, instead that went to Hal Jordan. There's a certain curiosity factor at work here, with a character such as Atrocitus giving us a peek into his mind, his misgivings and his past, courtesy of writer Peter Milligan, of course. While there's a decent share of bloodlust for fans of the red lanterns and their ilk, some expecting more violence and intergalactic mayhem might be let down, but the view into the mind of a character so driven by something as charged as rage is not bad.

I found myself torn between wanting to see more of the action that a series like this would inherently have and wanting to hear more of Atrocitus' thoughts on his state. It's a bit "mid-life crisis" ish in parts, but the concept is an interesting change-up from what might be expected. I'm torn. I'll have to suppress my rage, though, and grade this book. Since I'm having a hard time being pulled strongly into the side of liking it, this seems that this will have to do. Grade: B-