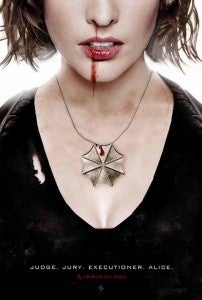 It’s been a while now since the trailer for Resident Evil Retribution came out and despite a few revelations given to us by the cast and crew of the movie, there are still many questions left to be answered.  And with the movie being released in little over a month, we are close to seeing this answers revealed.  But that certainly doesn’t mean we’re going to stop answering questions.

As a fan of the movies and game, I’ve watched this story unfold for ten years and can easily see that this story is beginning to wrap up.  With the introduction of new characters from the games and the resurrection of characters long thought dead, we can only begin to imagine where this series is heading.  So here are the five top questions raised by the trailer and some I would love to see answered.

1)  What is the purpose of the resurrected characters?

While watching the trailer, many fans couldn’t help but notice two very familiar faces pop up.  One being the head of the group asked to infiltrate the Hive in the first movie.  This character, James “One” Shade, was last seen being cut into many small pieces by lasers.  The other is Rain, another member of the group that succumbed to the virus and was then killed by Matt.  It’s been revealed that these characters, at least Rain, is a result of cloning.  More than that, it’s been told that there are two different Rains.  But besides this, what is the purpose of bringing these characters back?  Is it simply to rattle Alice by the echoes of her past or something more that we are just not seeing?

2) What roles do Ada and Leon play in all of this?

Ada Wong and Leon Kennedy have proven to be fan favorites of the video game franchise so it makes sense from a marketing standpoint to put them both in the next film.  But what is their purpose beyond fan pleasing?  Ada in the game series is an enigma, both villain and hero, she is the Catwoman of the Resident Evil Universe and no one but her knows her endgame.  So will this translate to the new film?  Seemingly, she looks as though she’s helping Alice.  But with how duplicitous her character is in the game, I’m wondering if that’s going to translate over to this medium.

But without Ada, it seems impossible not to have Leon (besides him being fans’ seemingly favorite character).  These two characters within the game universe seem connected in a way that is almost like fate.  Since their first meeting in Resident Evil 2 they have established a relationship that is both genuine and complicated.  So how will that play out here?  With the seemingly unknown character traits of Ada, will they be enemies, allies, or both?  And with Leon being the head of the resistance  against Umbrella, it seems more evident, with Ada’s personality, it may just be that.

3) What is the large creature?

This may be one of those that has an obvious answer but with movie adaptations of video games, it’s hard to say.  The creature looks very similar to the monster in the first movie that grew larger each time it killed someone.  It’s obvious that the same is true for this monster but what exactly is it?  Is it just a better version of the one before or something else?  At first, a part of me was wondering if Wesker would go the “William Berkin” route and succumb to the T-Virus in his system, turning into a true and powerful monster bent on nothing more than destruction.  This seems highly unlikely but I can only hope the monster has a better backstory then “Yeah.  We built it.”

4) What is Umbrella’s Main Purpose?

In the first two movies, we knew Umbrella was a pharmaceutical company that also played with Bio Organic Warfare and it’s their fault this whole mess happened.  But what about now?  Apparently, the entire world is infested with zombies and there are only a handful of human survivors.  So why is Umbrella still experimenting?  Why are they still hunting both humans and Alice?  Is it simply to perfect the virus to become the next Alice?  And if so, why does it matter when there isn’t anything to conquer anymore?  Add on the heart devices they’re putting on people’s chests, cloning soldiers of old, and now experimenting with the Las Plagas parasites, we have to wonder what it is they’re thinking at this point because I doubt they’re making money anymore.

5) How is this movie going to end?

Yes, this is a question you could ask for any movie but for this series it seem prevalent.  This franchise has been alive for 10 years and the story has slowly unfolded with each one (and with limited success for each one).  Each movie has ended on a cliffhanger.  In the first, Alice awoke in the destroyed Raccoon City.  In the second, she escaped the facility with the hint she was something more than human and something more than she was in that particular movie.  In the third, she found a facility full of her clones and in the last one, they were about to be attacked by Umbrella soldiers being led by the previously thought dead, and now controlled, Jill Valentine.  So what now?  This seems almost like the swan song of the series considering all of the old cameos and introductions of new characters so how is this going to unfold?  The Wesker thing is getting old and if they’re planning on doing another cliffhanger, and thus another movie, what more can they possible do to keep this franchise fresh?  And if they don’t go that route, how will they resolve the movie?  Even if they defeat Umbrella, what about the Zombies that now run rampant across the world.  Even with an anti-virus, I’m sure most of the people are rotting, mutilated corpses.  It seems almost like an impossible task to end this movie in a way that fans will enjoy as even I cannot think of a good solution without erasing everything that has happened before.

Regardless of this, the movie is at least going to be fun to watch.  With four powerful female characters in Alice, Rain, Jill, and Ada; the true introduction of the Las Plagas parasite, and probably the final fight between Wesker and Alice, it’s at least going to be action packed and mindless fun, even if the story doesn’t pan out the way we want.  Here’s the trailer for those that haven’t seen it yet.