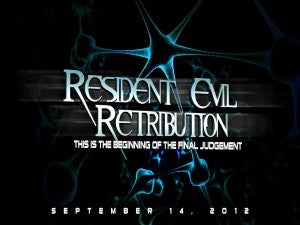 Like the monsters in the film, the Resident Evil movies will simply not die.  With Retribution we are now on the fifth film of this seemingly unkillable franchise.  Not only have I seen this film in the theater but I had the “pleasure” of seeing it in 3D.  Now, I have never been a fan of 3D.  I see it as a cheap gimmick simply there to inflate ticket prices.  Sadly, the only showings I was able to go to that fit into my schedule was 3D and I couldn’t stand a second of it.  There are some movies that are amazing in it (here’s looking to you Avatar) but this is certainly not one of them.  Sure there are a couple of cool moments but overall it was just bad.  With the glasses, everything just seemed much darker; as if I was watching it through sunglasses and because of that, the images seemed less detailed and harder to see.

With that aside, it’s time to get to the meat of this article and talk about the actual movie.  As a note, there might be slight spoilers about this and the previous films so be warned.

The film literally takes place moments after the end of Evolution and I have to say that it is my third favorite moment in the film.  It’s an artful, if you want to use that word, take on an opening sequence of a horror/action film and it really surprised me.  But sadly after the opening sequence, the film takes its usual detour into absurdity.  For those who haven’t seen the films (and if you haven’t you definitely should) it takes place at a time when the evil Umbrella Corporation has unleashed the horrific T-Virus onto the world.  There are hardly any survivors and no cure; the only hope of saving everything lies with one woman. Alice.

To try and explain the intricacies of the plot in this article would take too long so let me break down her character.  She was human, than a superhuman, now back to a human who is able to do un-humanlike things, and she holds the key to saving the world.   Because of that, it’s the reason why the antagonist of the past two films, Albert Wesker, decides it’s now time to save her.  You know, after trying to kill her before.  In that respect, he sends his top operatives Ada Wong, Leon Kennedy, Barry Burton, and two Red Shirts, to save her.  Unfortunately, it’s these three characters that detract the most from this film.

First off, I cannot understand the appeal of Leon.  As a character in the game, he is heavily boring and even more-so annoying.  But for some reason, ever since Resident Evil 4, he’s become everyone’s favorite character.  Sadly, the only thing Leon in the movie shares with his counterpart is the name, bad clothing, and horrible hair.  Barry, wearing a copy-and-paste outfit of his original clothing in the first game, is also nothing like this character.  He has absolutely no back story and is basically regulated to horrible one liners and a ridiculous ending scene for his character.  And then there’s Ada.  In the game she is an entity all her own.  Working for everyone and only for herself. She’s as a big a mystery as the puzzles you have to solve in-game.  Here, she’s a simple agent working for Wesker and with no ties to anyone else.  But it’s not the grand departure of the characters that hurt.  Oh no.  The worst part of all of this is how horrible the actors are.  They speak in stilted sentences with almost no emotion; especially Bingbing Li who plays Ada.  It’s great they hired an Asian actress but they could have at least hired one that had the same presence as Ada in the game and knew how to act.

But besides these small character things, there are a lot of great moments in the film.  Like for the fact there’s Sienna Guillory playing Jill Valentine.  Jill had appeared in the second film and then totally disappeared for the next two.  She’s back sporting the same look her character looked like in the game Resident Evil 5.  True, her acting is almost no better than her coworkers but you at least buy that she’s a tough woman who could kill you without blinking.  And one thing that gamers can appreciate, if nothing else, are the Easter eggs hidden throughout the movie that are pulled from the games themselves.  The biggest of these is Alice’s first encounter with Ada wherein the scene is a carbon copy of Leon and Ada’s meeting in Resident Evil 4.  And there are plenty others that would be too long to list.  Needless to say, a drinking game could be made from it.

The story is less than stellar.  At this point, any semblance of a real and coherent story is out the window.  To even understand what’s going on you have to be a fan of both the game and have seen all the movies.  I went with someone who had only seen the first movie and he seemed utterly lost.  But here’s the great thing:  he still enjoyed the film.

And that’s what you have to tell yourself going in.  This is not an Oscar candidate.  This is a purely guilty pleasure, fun movie.  There were numerous, unintentionally funny scenes and the best part is laughing along with someone at the ridiculous lines and reasoning these characters used.  But let’s be honest; no one goes to these movies for plot.  They go for the fight scenes and believe me when I say that you will not be left wanting.

There are two stand out fights that stand out in my mind.  The first involves Alice, a gun, a large chain with a lock at the end, and numerous zombies.  The second is the climactic fight between Jill, Alice, Rain, Leon, and Luther.  The fight is long but it is absolutely amazing to watch.  It’s fluid and violent and plain fun to watch.  And despite what you may think of Milla Jovovich’s acting, you have to admit you totally buy her as this character and that she truly does seem like a badass.

Overall, if you want a fun movie that you can both laugh at and thoroughly enjoy despite a convoluted, mess of a plot, than this is definitely one you should go to.  But I highly suggest you see it outside of 3D as I’m sure it’s much more enjoyable that way and will cause the headache I had after watching it. Rating:  B-