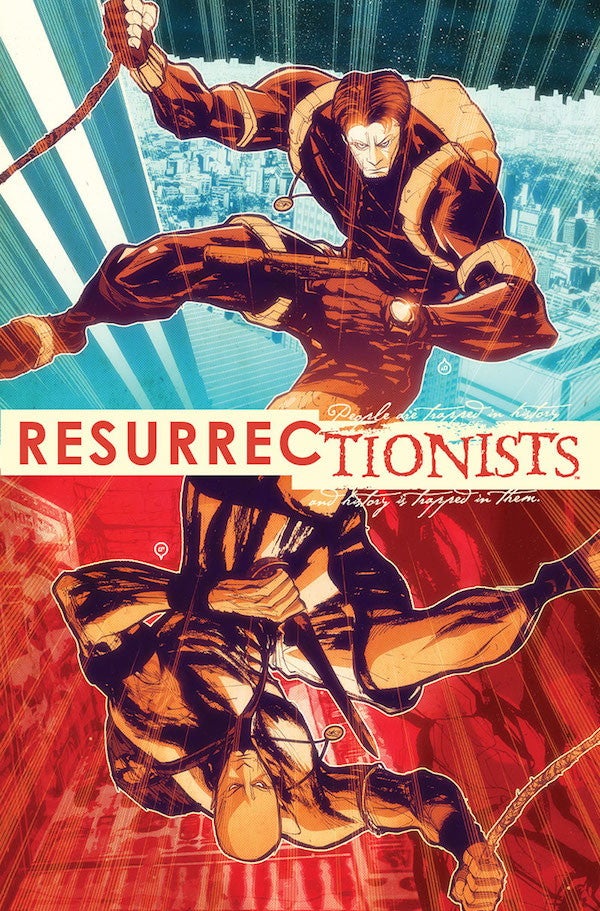 Resurrectionists #1 is the newest creator owned series from Dark Horse Comics, scripted by Fred Van Lente, drawn by Maurizio Rosenzweig, and inked and colored by Moreno Dinisio. The series follows Jericho Way, a thief in the modern world, who is discovering that he has the unique ability to call upon the memories and experiences of past lives including one as an architect in ancient Egypt.

Although the concept is intriguing, it’s Rosenzweig’s storytelling that really sets the stage in this first issue. Although there is an ample amount of expository dialogue, the story really takes off when Rosenzweig is able to provide the pages with kineticism. He relishes constructing impactful changes in motion and creative page compositions. Early in the story he creates a series of panels that reveal a woman calling upon three different past lives in order to win a fight. The sequence moves between a fearsome viking to a skilled martial artist, each revealing a different aspect of her abilities and style of combat. It is a sequence that shows Rosenzweig is capable of creating exciting action, while also exploring the conceit of the series.

He also composes some slower sequences that are every bit as fascinating. Page 21 features a man shocked at the loss of his wife. It’s a timeless sequence that reads in a circle around a horrifying central image. Although it doesn’t feature the fast motion or violence that makes much of his work effective, it functions as a great emotional spread.

Rosenzweig sometimes struggles with perspective and anatomy though. It is not a persistent enough problem to greatly detract from the reading experience, but it is noticeable. The most obvious examples all occur within the introductory sequence. At one point a woman is shown swinging out above the city, yet her proportions in relation to the rope and edge of  a nearby building are unnaturally small. That same woman is shown at the end of the sequence posed naturally, but with elements of her body appearing in a way that is not anatomically correct. Both examples were enough to make me pause and lose the flow of the page.

Dinisio helps to mitigate these issues though, as his inks have a clear effect on the work and work to build upon it. At times it is reminiscent of Klaus Janson’s work with John Romita Jr. He aims to bring out the strengths of Rosenzeweig’s art and mitigate its weaknesses. He succeeds in this and helps to bring excellent definition to the faces of characters that make the dialogue-driven sequences much more effective.

Van Lente’s script provides a good introduction to the narrative. The inner workings of the resurrectionist power are not explained, but he provides opportunities throughout the story to display how it affects its users. There’s no unnecessary exposition or captions used to explain things that could just as easily be shown. He uses the two narratives of Jericho and his past self in Egypt to walk readers through these concepts instead. Both of these narratives weave together naturally and dovetail nicely together at the end. Rather than serving as the first twenty pages of a longer story, this issue actually feels like an opening chapter. The use of a dead wife feels very much like a “fridging” trope though and Van Lente’s script is much more focused on the male leads of the story in this issue.

There is clearly a lot of story left to tell though and Van Lente has time to flesh out a full world with women who are not props. Rosenzweig and Dinisio are proving themselves to be an art team worth watching, one that creates a better product through their collaboration. Resurrectionist #1 is a tightly scripted and kinetic debut, one well worth considering.

Resurrectionists #1 is Another Intriguing New Series from Dark Horse (Review)