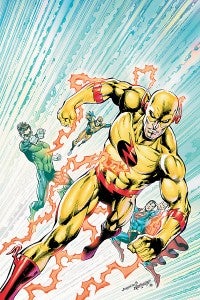 The Reverse Flash, previously seen in Flashpoint where he was portrayed as the villain but turned out to be little more than an interested bystander, will make his first New 52 appearance in the upcoming Flash #17, due in stores in February. For those wondering, it won't be "Professor Zoom" that he goes by, but "Reverse Flash"--and that plays into the character's story. "We've stated what Flash's mission is and why he runs," co-writer Brian Buccellato said in an interview with Comic Book Resources. "Reverse-Flash is going to flip that on its ear. For astute people that have been following our book, they can already get an idea of what Reverse-Flash's mission is going to be." "It's going to be a really interesting take on the character," co-writer and artist Francis Manapul added. "We really enjoy taking some of these things and putting them in a metaphoric and sometimes literal way. It's fun to do something like that." Another thing he won't be, is any of the previous versions of the character. Edward Clariss, Eobard Thawne and Hunter Zolomon will remain missing in action at least for now in the New 52, while a totally new Reverse Flash is introduced to take on this new role. "That's the whole thing: It's going to be a little bit of a mystery. Exactly who is Reverse-Flash?" Buccellato told CBR. Manapul explained, "The next story arc after Gorilla Warfare is going to focus more on Barry Allen and his detective skills, finding out who Reverse-Flash is. We're going to be sending Barry on a mission to try and figure out who this guy is." Not only does changing the identity of the Reverse Flash create new story possibilities for the character, but it takes one particular story--how Thawne would remember the events of Flashpoint, in which he played a key role before the universe was reborn--off the table. Other DC Universe characters who were standing in the altered timeline of Flashpoint when the reboot happened were table to travel back "home" to the New 52. Although they have limited, altered or no memory of the universe before it happened, both Booster Gold and Barry Allen/The Flash were demonstrated to have returned from Flashpoint and made their way to the New 52 with some implication that they remembered something from before. A third character, Alexandra Gianopoulos, seemed to return alongside Booster and apppeared to be featured on the cover of one solicited version of Justice League International #1 (and another, later issue as well) but ultimately was replaced with Godiva in the final series and not used. "It's a mistake. A screw up," series writer Dan Jurgens told ComicBook.com of her appearence on the cover of Justice League International #5. "She shouldn't be there as she wasn't yet due to appear in the book." Yes. So she was set to appear in JLI someday, but as so often happens in comics and Creedence Clearwater Revival songs, that someday never came. One last note: don't expect the Reverse Flash to look in the upcoming story the way he looks above, or in Flashpoint. Rather, the creators say they're currently reinventing his look to be more in keeping with what they're trying to do with the character thematically. While they say he'll definitely be yellow, nothing else is a given--and even they don't know yet what he'll look like. "To be perfectly honest, we didn't know this interview or this announcement was happening so fast, so I can tell you -- no designs have been done yet," Manapul told CBR.