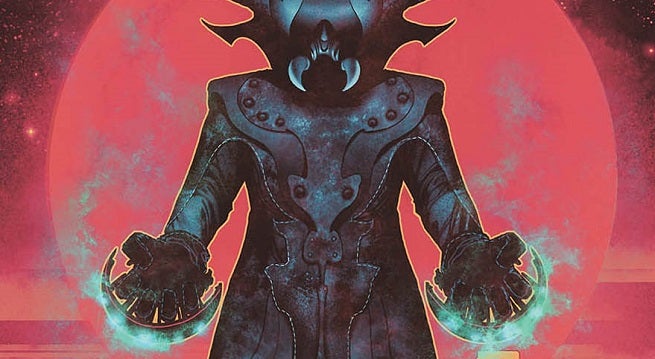 Grant Morrison's Annihilator is a difficult series to judge on its own merits.

That isn't to say the book isn't good -- by the end of the first issue, it's clear there's a lot there to love. It's just that the project has sprung so fully-formed from Morrison that there are obvious homages, winks and nods to his other work.

Not just The Multiversity -- his world-hopping, metafiction-challenging DC Comics event series going on now -- but really his whole canon. There are lines in this book that you can recognize as being from The Invisibles or The Filth and, just for added value, the movie-within-a-movie looks and feels al ot like The Invisibles as well.

That's no surprise, of course; that series has long been something of a guidebook to reading Morrison. To spot its influence in Annihilator proves only that we're paying attention. 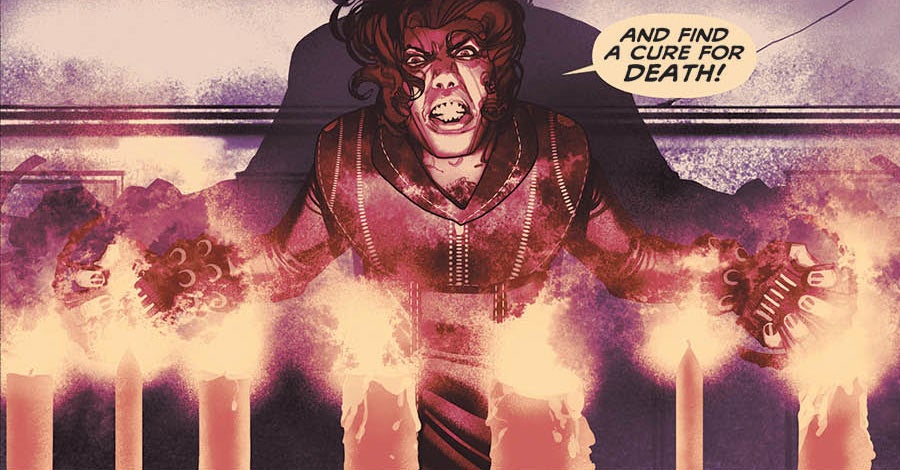 The series -- which saw its first issue hit the stands last week -- deals with over-the-hill screenwriter Ray Spass, whose sex- and drug-fueled attempt at recapturing fame by writing a dark, twisted sci-fi horror movie is facing a number of problems. Writer's block, an unhappy editor, sarcastic prostitutes and an inoperable brain tumor all play a role in keeping Spass's Annihilator from being completed; the film is trapped in the first act, overlong and trying to be smarter than it really is.

The final-page reveal here is the kind of thing that leads a reviewer to give the title a few days to find its audience. While it was revealed in interviews with Morrison, the dramatic way it took place still plays as a shocking moment on the page.

So, yeah -- from this point on, spoilers ahoy, and while we'll protect you from the first and biggest one with spoiler text, discussion and analysis of the plot point will make it pretty obvious from context so you're warned.

In the final pages of the issue, Spass

(fresh off being diagnosed with a terminal brain tumor) finds himself face to face with Max Lomax, the lead character in his screenplay and a fairly despicable guy who might, charitably be called an antihero in the same way Warners is using it for longtime Shazam villain Black Adam.

There's a bit of an explanation in an official Legendary interview with Morrison, in which he draws parallels between Annihilator and All-Star Superman. You can see that just below.

The tension between fiction and reality has long been a staple of Morrison's work, of course; dating all the way back to Animal Man and its famous "I can see you!," the writer's work has wrestled with the interplay between reality and the worlds we create. Final Crisis dwelt on this significantly, and the ending of All-Star Superman toyed with the notion as well. Here, you've got a series that Morrison himself acknowledged during an interview with me is a companion piece to The Multiversity, in which superheroes from around the multiverse have gathered to battle a mad Monitor -- and at least one superhero, plus the Monitor himself, is aware that the world they inhabit also exists as a comic book series. 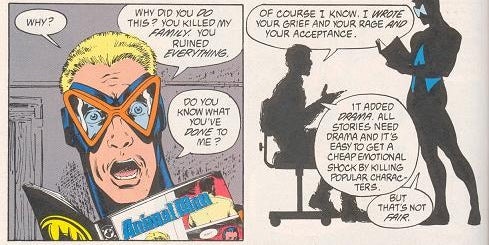 So Morrison, who was confronted by Animal Man once for poor creative choices on that title, is no stranger to a scenario where a creator and his creation are interacting. That it's the central conceit of Annihilator just takes some of Morrison's favorite concepts as a writer a step further.

So, acknowledging that Morrison's fingerprints are all over this piece and that it's uniquely his, how does it stack up against his other work?

Pretty well, in most respects (with the caveat that we're an issue in, so it's hard to say definitively).

The story takes a while to get off the ground in this first chapter, but then again, this is the first issue of a miniseries and that will read better in trade.

Even there, it isn't boring, because the intercutting between Spass's drug- and sex-fueled escapades and the science fiction horror of his script is done well, and the parallels being drawn between his own life and that of Max Lomax are established fairly early and they're cleverly done.

The art is where this comic is where I'm a bit torn; Frazer Irving's work is beautifully-executed even while it doesn't resonate with me personally. I think it's the color, since early shots from the book and some of the pages, like the "cure for death" image above, which aren't as dark and washed-out I still find very appealing. It feels a bit like Daniel Acuna's work, which is similarly popular with audiences but hasn't ever connected to me personally -- so I'll admit to that being a bias and nothing more.

The visual storytelling in the issue, which is more important and less subjective than whether the images are "pretty," is terrific and the character designs -- while they feel very Morrison-inspired in their similarity to The Invisibles -- are creative and simple, and the book in general looks good.

At the end of the day, it's a first issue, and there are a few missteps but it's easy to forgive them becuase overall the book is off to a strong start, with a lot of story and thematic fodder to play off of in future issues. The biggest challenge here will be to pay off everything this story promises in a satisfying way.

Review: Annihilator #1 Is a Great Start